Preacher: I Treated God as a Real Person, and He Helped Me Stop a Kidnapping May 24, 2021 Hemant Mehta

Preacher: I Treated God as a Real Person, and He Helped Me Stop a Kidnapping

During a service yesterday morning, Nebraska preacher and false prophet Hank Kunneman of One Voice Ministries explained to his audience that when he was younger, he used to treat God as a literal “friend” out of respect.

He would open car doors for God. He would order for God at a restaurant.

Kunneman admitted that it must have seemed weird to outsiders, but there was value to it!

… the same neighbors that would make fun of me, there was one that was getting pulled into a truck by two guys that were trying to kidnap her and rape her. And one morning, the Holy Spirit woke me up and He said, “Go out now!” I said, “Go out where?” He said, “Go out front!”

And I went out, and as soon as I went out, they were getting ready to drag her. They were pulling her across her yard, and I spoke, and I said, “In the name of Jesus of Nazareth, LET HER GO!” And they dropped her.

And I began to point my finger at ’em, and I said, “You get out of here!” There was so much power. They were shaking as they left.

That’s it. That’s the end of that story. No explanation of who those men were, why they were kidnapping the neighbor, what happened to her afterwards, nothing.

And of course he never tells us the neighbor’s name. (Because he’s a professional liar and he knows his Christian audience will never challenge him.)

Even if that story were true, I’m guessing the presence of a witness — not necessarily the words about Jesus — was enough to frighten away the men. I’m honestly not even sure what opening a car door for Jesus has to do with screaming at potential kidnappers.

But I do appreciate it whenever a pastor just openly admits he acts insane to appease God. 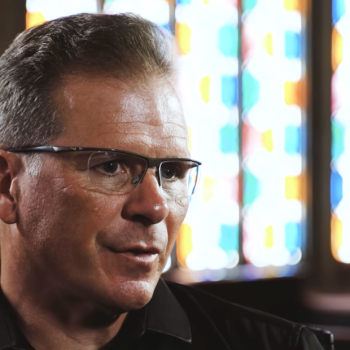 May 24, 2021 Christian Hate-Preacher: The "Elites" Who Got Vaccinated Just Got "Sugar Water"
Browse Our Archives
What Are Your Thoughts?leave a comment