“Prophetess”: We Don’t Have to Pray for Biden Because He’s Not the President May 21, 2021 Beth Stoneburner

“Prophetess”: We Don’t Have to Pray for Biden Because He’s Not the President

Self-proclaimed Christian “prophetess” Kat Kerr is know for saying bizarre things about football and warehouses of body parts in Heaven. But she’s also spread other kinds of dangerous lies, like the idea that Joe Biden isn’t actually president.

She’s said God told her Donald Trump won in 2020 and that God would “kick [Biden] out” if he was inaugurated.

She’s still spreading the Big Lie. And now she’s telling Christians they don’t need to pray for Biden because he’s not a legitimate authority figure.

“It says, ‘Pray for those who are in authority,’” Kerr said. “We the people didn’t vote that person in. … And the real truth is we know who is the president, who won in 2020 — stop saying the prophets were wrong — the winning was for the ‘T’ person. Number 45 won, he won, won, won in a landslide. It was stolen, and 80 million people know that it was stolen.”

“When you sit in an office and you’re duly-elected correctly and legally, you have a voice and you are in authority,” she continued. “Those who steal, who steal and hide, they are not in authority legally in any way — not in the spirit realm, not in the physical realm — they’re not in authority, so we shouldn’t pray for them. We should pray for them to be fully exposed, every lie be exposed, that is what God is saying. Pray they be exposed and taken down and those who rightfully won be put in the offices that they were elected by we the people, who have the say in this country.”

The Bible also says “The truth will set you free.” The truth is that Biden won, there’s no evidence of election fraud, and no amount of wishful thinking will change that. Maybe Kerr hasn’t read that far into the book.

The Bible also says “pray for your enemies.” For Kerr, that would be Biden. By her own faith’s authority, she would still be obligated to pray for him. But when politics controls your faith and not the other way around, we shouldn’t be surprised when the hypocrisy is so obvious. 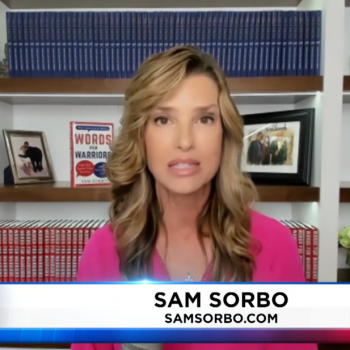