The New Leader of a Major Northern Ireland Political Party is a Creationist May 15, 2021 Hemant Mehta

The new leader of the Democratic Unionist Party (DUP), the largest single party in the Northern Ireland Assembly, is a Young Earth Creationist.

Edwin Poots will succeed the party’s current leader Arlene Foster when she resigns later this month, a move the party demanded as a way to win over voters who aren’t happy with the party’s pro-Brexit stance. Religion played a role, too, which isn’t a surprise given that the DUP is anti-abortion and anti-marriage equality.

Free Presbyterians — Christian evangelicals who comprise a dwindling but still important chunk of the party’s base — were also angered when Foster and two DUP ministers abstained last week on an assembly vote to ban gay conversion practices.

In other words, the current leader wasn’t conservative enough for their taste, so they elected someone who openly believes obvious lies. (I’m feeling déjà vu…)

Anyway, Foster is out and Poots is in, having edged out his only opponent in a 19-17 vote. Which means it’ll be up to a Creationist to win over voters looking to the future. Good luck with that when the party’s platform is already backwards. But it’s also possible his views won’t have any effect on politics at all:

The Democratic Unionist party has entrusted its future to a man who does not quite believe in the past. Edwin Poots is a young Earth creationist who thinks the planet is 6,000 years old.

“His creationist beliefs won’t matter to what sort of leader he will be. He doesn’t bang on about religion in the assembly,” said Jonathan Tonge, a University of Liverpool politics professor who is an authority on the DUP. “What matters is where he takes unionism in the next few years.”

It’s hard to imagine someone who lacks the most basic critical thinking skills — and blindly accepts the lie that the Earth is around a few thousand years old because a book once implied it — possesses the ability to move his party and country forward. No one who thinks one book has all the answers should be anywhere near political power.

But it’s obviously not impossible. The U.S. is full of religious fundamentalists in the highest levels of government. They’re awful politicians who make the country worse, but they’re politicians nonetheless. If Poots can keep his insane beliefs private, as his colleagues say he does, then it’s possible he won’t be a global embarrassment, But it’s not a good start. 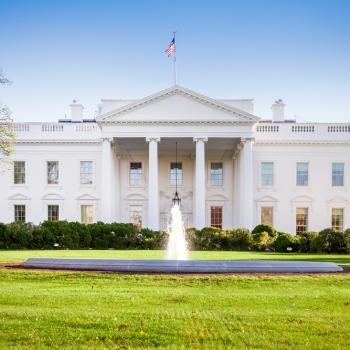 May 15, 2021
The White House Faith Office Met with Leaders of Several Atheist Groups
Next Post

May 15, 2021 Anti-Racism Activist Rev. Rob Lee IV Isn't Related to Robert E. Lee After All
Browse Our Archives
What Are Your Thoughts?leave a comment