A Creationist Laughably Said He Was “Deplatformed” After Speaking at a Church April 18, 2021 Hemant Mehta

At the beginning of the year, Grace Point Church in Bentonville, Arkansas did a series of sermons on “ORIGINS: Getting Back to God’s Original Design.” They even invited Creationist Dr. Terry Mortenson of Answers in Genesis to deliver a guest sermon — and as you’d expect, he spent the entire time promoting evolution-denial and advertising Ark Encounter and the Creation Museum.

None of that should’ve been surprising. If you invite an AiG staffer to speak at your church, you know what you’re going to get.

According to Mortenson, he made his case for why Christians had to accept a literal interpretation of Genesis 1 because it was the foundation of everything else in the Bible. If you don’t accept Creationism, then you’re not going to accept the Jesus story or the teachings in the rest of the book. And part of the reason society is crumbling is because people don’t accept the Bible’s moral teachings.

… I explained that Genesis 1–11 is foundational to the rest of Scripture and showed that the acceptance of millions of years and evolution undermines the Bible’s teaching on sin, marriage, death, the gospel, and morality. With respect to marriage, after quoting Jesus in Matthew 19:4–6, I said that adultery, fornication, pornography, homosexuality, and transgenderism are all wrong because they are contrary to God’s created order and commands.

(The video above doesn’t include the specific language he mentioned, so it’s possible he said those things in an earlier sermon that same day.)

Again, none of that is shocking. That’s what you always hear from AiG speakers.

But I guess the church wasn’t happy with that line suggesting homosexuality and “transgenderism” were problems because they promote the evangelical belief that being gay isn’t a sin (but acting on it is) and they already have a less-than-ideal relationship with trans people in general.

The following week, Pastor Mike McDaniel delivered something resembling an apology for what Mortenson had said:

… in this gender confusion world which we live — which is called, has been medically called “gender dysphoria” — we struggle with, again, our identity sexually. And, um, it’s a touchy situation, and I want to handle all of those topics delicately, and if they’re not handled delicately — and I’ll refer back to last Sunday a little bit. The first gathering, especially. I don’t believe it was handled delicately, and so I apologize if you were offended in any way, um, with some of those comments… There is a right and a wrong, but there’s a right and a wrong way to do things, and talk about things, and address things…

It’s not an apology. He doesn’t accept transgender people, either. If he’s upset with Mortenson, it’s only because he said all of that bluntly and without any concern for how it would be received — whereas people like McDaniel prefer to shine their bullshit before delivering it.

For that reason, McDaniel apparently told Mortenson to tone down his rhetoric before speaking at the next service that morning. Here’s how Mortenson tells the story:

During the last song, the pastor asked me to go backstage to a room. He told me that what I said about the moral issues (especially my brief LGBT comment) was not what he wanted and that I needed to change the message before the second service and essentially replace that marriage section with comments about God’s greatness and design in creation.

He accommodated that wish — I believe the Vimeo video above is from that second service. But the church did even more than that. They later removed the video of Mortenson’s sermon from their Facebook and YouTube pages. (They seem to have forgotten the copy on Vimeo.) It’s almost comical how this church posts literally everything online… except for Mortenson’s sermon.

No wonder the people at Answers in Genesis are furious.

Ken Ham posted an article this week claiming that this amounted to a “deplatforming” of their colleague — which is both typical for right-wing reactionaries and a sign that these people have no clue what that word means.

Mortenson wasn’t deplatformed. He spoke! They invited him and (I assume) paid him. They asked him to use softer language at one point… and decided that his views didn’t align with their goals, so they chose not to spread his message like they do their other ones… which is well within their right.

Yet Ham can’t deal with it.

Yes, our own Dr. Mortenson, who is a very popular and gracious speaker and has been in ministry for 47 years giving presentations on creation all over the world, including in communist countries, was “deplatformed” by a church in the USA. The pastor even gave an apology to the church about our basic approach on how to understand Genesis.

That last line is referring to how the pastor told his congregation the following week that Genesis didn’t have to be taken literally. It’s not like your salvation depended on following a specific interpretation.

He’s still spreading Christian propaganda, but it’s more mainstream propaganda. And Ham uses that sermon as proof that some Christians can’t handle the truth and this is why True Believers™ need to push back.

So criticize Ham for blowing this small slight out of proportion. Criticize Mortenson for spreading lies about how we came to exist. But also criticize Grace Point Church for being foolish enough to invite a Creationist — one who has always espoused hateful beliefs about LGBTQ people and who always talks about the need for Christians to accept a literal six-day Creation — to speak to the congregation.

Mortenson gave a predictable speech. If McDaniel was embarrassed by it, you have to wonder what he was expecting. He didn’t do his research. That’s his fault. And McDaniel also shouldn’t be given any credit for asking Mortenson to tone down his rhetoric. McDaniel believes the same anti-LGBTQ myths that we’ve come to associate with white evangelical churches. Pretending you love LGBTQ people while acting like their orientations and identities are sins that may need correcting is nothing more than Christian bigotry.

There are no good people in this story. Just people who spread their hate and lies in different ways. 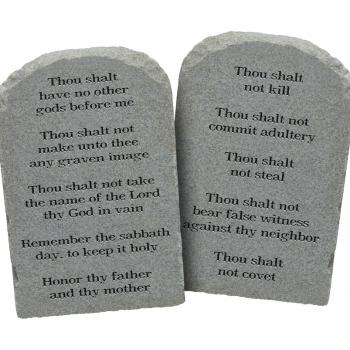 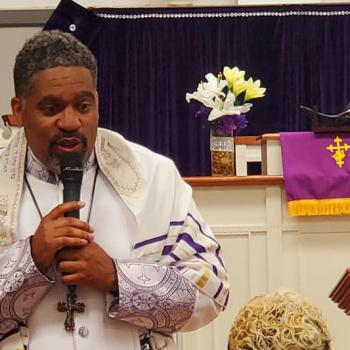