Christian evangelist Mario Murillo, who claimed last year that God sent Donald Trump to “save” people from Democrats and that none of the Capitol rioters “were Trump supporters,” now says Democrats are the worst thing plaguing America.

He says this while we’re still in the midst of a pandemic. There’s a literal plague going on, but he’s still mad about Democrats. And he adds that when God destroys America for its wickedness, we can lay the blame on the blue.

“I felt the fierceness, the rage, and the absolute spirit of God Almighty,” Murillo said. “I fear for the Democrat Party tonight because you ain’t messing with me anymore, you’re not even messing with the people in this room, and you’re not messing with these pastors–I saw God get up off of his throne, roll up his sleeves, and tell America, ‘I’m coming. I’m coming!’”

“God is not about drag queens reading to our children,” Murillo bellowed. “God is not about your 6-year-old, because of social media, thinking she’s a boy. This gender-bending, this perversion, this Coca-Cola, American Airlines, Delta Airlines, all of you that are sitting there telling Georgia how they can write their laws; through your money, you’re going to tell a free state in America what they can do? God’s not gonna sit back, folks. Jehovah-jireh is on the move. He’s coming. He’s coming with fire. He’s coming as a lion.”

“God is coming to save America, but it’s not gonna be fun,” Murillo warned. “All of you evangelical leaders who voted for Joe Biden, and God help you, turned around and told other Christians to vote for Joe Biden, you think you’re going to get off the hook scot-free? You think you’re gonna get a little slap on the wrist? There’s a mighty God coming and saying, ‘How could you endorse abortion like that? How can you destroy a marriage?’”

This is what many evangelical Christians are hearing in their churches week in and week out.

No reasonable person would claim that the Democrats are a perfect party. But in terms of wicked actions destroying the country, you could easily find Scriptural justification for God’s anger by looking at abusing hospitality (Genesis 19), not welcoming refugees (Exodus 22:21), and failing to care for the poor (too many to list).

No one’s asking Murillo to accept drag queens or trans people. Their decisions don’t even affect him. Yet they’re an easy scapegoat for someone who thinks the problems plaguing the country as a whole — affecting people across race, politics, and creed — have to do with social justice and LGBTQ inclusion than… any actual problems.

Currently, only one party is making any attempt at addressing those actual issues. 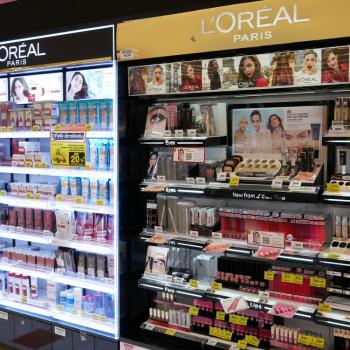 April 16, 2021
Atheist Sues L'Oreal Over Repeated Acts of Harassment by His Christian Boss
Next Post

April 17, 2021 Should Two Oregon Educators Be Fired for Making an Anti-Trans Video?
Browse Our Archives
What Are Your Thoughts?leave a comment