Even Pat Robertson Can’t Believe a Cop Could Confuse a Taser and a Gun April 15, 2021 Hemant Mehta

Every now and then, televangelist Pat Robertson says something sensible and his critics just watch in shock. Like when he said our existing drug laws needed to be revisited because “criminalizing the possession of a few ounces of pot…[is] just costing us a fortune and it’s ruining young people.” Or when he mocked Young Earth Creationists by saying, “Bishop Ussher… wasn’t inspired by the Lord when he said it all took 6,000 years; it just didn’t!” Or when he chastised Christians last year for holding large indoor church services in the midst of the pandemic.

It happened again today, when he went off on bad-apple cops like the one who fatally shot Daunte Wright because she supposedly confused her gun and her taser.

… There’s just no comparison [between a taser and a gun]. Now how [officer Kim Potter] made the difference, when she shot that poor guy to death, [was saying], “This is what I thought… was my Taser.” And if you can’t tell the difference in the feel of those things, it’s crazy.

You know, I am pro police, folks! I think we need the police. We need their service, and they do a good job, but if they don’t stop this onslaught, they cannot do this.

You know the police in Virginia picked up a lieutenant in the Army and began to give him trouble, and our state police are highly trained, but why they don’t stop this — and this thing that’s going on in Minnesota… about Derek Chauvin. I mean they ought to put him under the jail. He has caused so much trouble by kneeling on the death of George Floyd — I mean on his neck. It’s just terrible what’s happening.

And the police: Why don’t they open their eyes to what the public relations are? They’ve got to stop this stuff!

When even Pat Robertson thinks you’re crazy, you know you’ve screwed up…

Robertson’s co-host Terry Meeuwsen suggested cops need more training, and Robertson himself said maybe they needed to pay more to recruit better people — “We don’t have the finest in the police department!” — but neither of those solutions address the real problems underlying the shootings we’ve seen.

Don’t get too excited about Robertson, though. He’s never had a two-day winning streak. The theological whiplash always returns and he’ll be back to saying crazy things in no time. 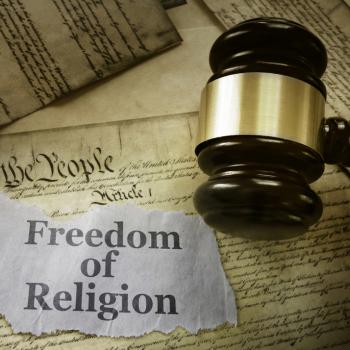 April 15, 2021
Religious Liberty Shouldn't Be More Sacred than Other Rights
Next Post

April 15, 2021 MO Lawmaker, an Ordained Pastor, Resigns After Fallout from Sex Abuse Claims
Browse Our Archives
What Are Your Thoughts?leave a comment