Professor Ryan P. Burge has been going through the latest massive data set available from the Cooperative Congressional Election Study (CCES), and he recently shared this snapshot of America that’s just incredible.

It shows various faith-based and non-religious voting blocs as a share of the entire population. 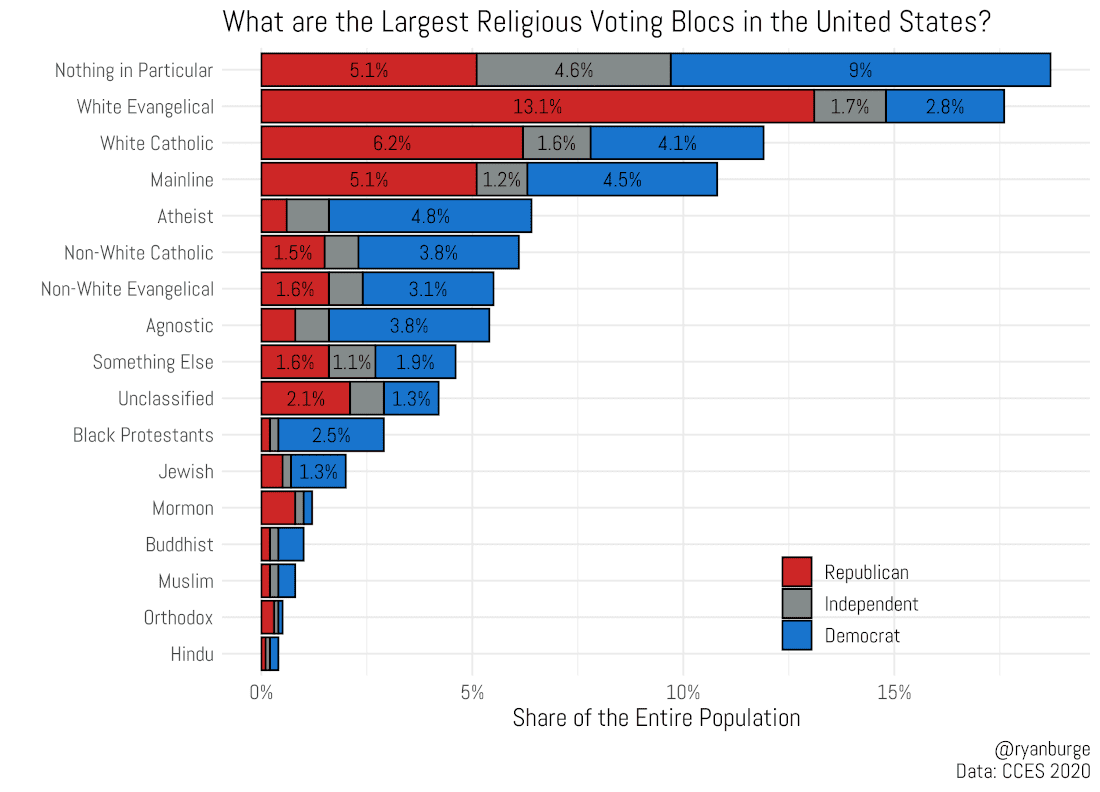 I wouldn’t read too much into the top line. Religious “Nones” might be the largest group of voters in the country — that wasn’t the case in 2018! — but we’re not bound together in any meaningful way.

Still, there’s reason to be optimistic: That 13.1% of white evangelical Republican voters is the largest single voting bloc, and we know all too well how much influence they have over our politics, BUT if you add up all the Democratic “Nones” — the “Nothing in Particular” group, the atheists, and the agnostics — it’s 17.6% of the population.

There are more of us than them, and we’re still growing.

That said, it’s still easier to corral evangelical Christians into voting for a Republican candidate, whether that involves peer pressure, guilt-trips, or shaming the congregation from the pulpit. I suspect those 13.1% of evangelical Republicans are far more monolithic than the 17.6% of Secular Democrats. But it’s all the more reason Democratic candidates in large parts of the country should openly work for the Secular vote by talking about the importance of church/state separation, LGBTQ rights, abortion access, quality science and sex education in school, and any number of other issues that unite most Secular Democrats while also being opposed by so many conservative Republicans.

We’re past the tipping point on this. No one’s asking candidates to endorse atheism or condemn religion. (Leave that to us.) But the things most Secular Americans want from the government are also just good ideas in general. Progressive candidates already know that.

It won’t work everywhere, but far too many Democratic candidates in large areas are leaving votes on the table because they’re scared of alienating a religious base that will never support them anyway. Seems far more strategic to stop playing it safe and get those non-religious voters excited enough to vote for you. The Religious Right will always paint Democrats, even moderate ones, as existential threats. Stop playing their game and start advocating for a good secular government. So many otherwise-apathetic secular voters could be won over that way.