Iowa’s GOP Gov. Used Her Office to Raise $30,100 for a Private Christian School

Iowa Governor Kim Reynolds has used her position and her time to raise $30,100 for a Christian school, crossing the line of church/state separation many times over. 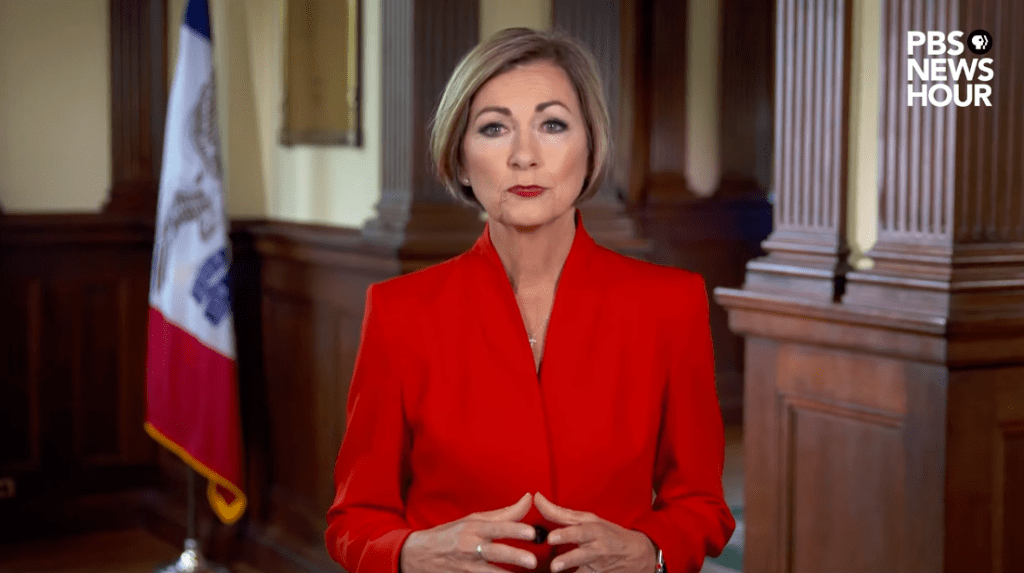 It was part of a fundraiser for the Des Moines Christian School. Reynolds “donated” dinner with herself and her husband — for eight people — at the governor’s residence. The winning bid in that auction ultimately went for $30,100 on Saturday night.

Auctioning off access to the governor’s time is problematic enough, though it could probably be justified for a charitable cause that benefitted everybody. But this was for a private Christian school, and Reynolds did this in a professional capacity. Her Democratic predecessors didn’t do this. (Her Republican mentor did.) And you can imagine the outcry if an Islamic school was given this sort of treatment by a Muslim governor.

Laura Belin of the blog Bleeding Heartland sent a number of important questions to the governor’s office, including this one:

7. Who will pay for the food and staffing costs associated with the dinner donated to the Des Moines Christian School?

The state’s annual budget includes an appropriation to cover the costs of Terrace Hill staff. But public funds should not be used for an event benefiting a private organization. Article 3, Section 31 of the Iowa Constitution states that “no public money or property shall be appropriated for local, or private purposes, unless such appropriation, compensation, or claim, be allowed by two-thirds of the members elected to each branch of the General Assembly.”

Those questions were sent last week. There’s been no response yet.

Now the Freedom From Religion Foundation is getting involved. The group sent a letter to Reynolds’ office on Friday warning her against this kind of action. (There’s not much else they can do at this point without more details.)

While your charitable goals are commendable, the evangelical mission of Des Moines Christian School makes it a poor choice for endorsement by a government official. You may not use your position as governor or the governor’s mansion in order to fundraise for a private religious school…

… When a governor auctions off a dinner with her in the governor’s mansion in order to raise money for a private Christian school, reasonable citizens will interpret this as government endorsement of religion.

We request assurances that you will not use your position as governor, or any government resources to financially support or endorse organizations with religious missions again in the future.

The strange thing is that Reynolds could easily have done this as a private citizen, auctioning off dinner on a night off, in her family’s home. Instead, she threw in the resources of her office in a way that should be off-limits for anyone.

It’s not like the public has high expectations for a Republican in power, but even doing the bare minimum seems like too much of a stretch for Reynolds and her party.

(Screenshot via YouTube. Thanks to Joe for the link)