Rev. Richard Daschbach was ordained in the Catholic Church in 1964 and arrived in the country now called East Timor shortly after that. He was there during an independence battle that claimed over 200,000 lives. He created a home for people who had nowhere else to turn — often victims of abuse — and took in plenty of donations and goodwill.

But privately, according to Margie Mason and Robin McDowell of the Associated Press, here’s what he was doing with the little girls he was supposed to help:

Later in his room, they said Daschbach would strip down to white boxer shorts and a T-shirt and then undress the girls, giving them deodorant to put on before fondling them and quietly guiding their hands to touch him. Then, they said, there would often be oral sex. One accuser also alleged she was raped.

He would sometimes ask the children with him on the lower bunk to switch places with one or two others sleeping on the mattress above, they said, adding abuse also occasionally occurred during afternoon naps.

15 girls are now going to court against Daschbach, marking the first priest abuse case in a nation described by the Associated Press as a “country that is more solidly Catholic than any other place aside from the Vatican.” He faces up to 20 years in prison if convicted. Considering how he’s 87-year-old, that’s how he would end his life.

Making matters even worse, Daschbach shouldn’t be a priest at all. The Catholic Church defrocked him in 2018 precisely because he had admitted to molesting kids. But being away from prying eyes and surrounded by vulnerable people has allowed him to continue his abuse.

Even people who have donated to his shelter are shocked by the extent of the abuse:

Jan McColl, who helped fund Topu Honis, said she was devastated after she and another longtime Australian donor, Tony Hamilton, flew to East Timor and asked Daschbach point-blank whether he was a pedophile.

“He said, ‘Yes. That’s who I am. And always have been,’” said McColl, adding he responded calmly while continuing to eat his lunch. “So, we just got up and left the table. We were just absolutely distraught.”

The AP says his legal strategy may involve claiming he’s the “victim of a conspiracy.” As if 15 girls are all making up the sordid details of what he did… and confessed to many times over.

If nothing else, this is a reminder that the Catholic sex abuse scandals never really ended. There are still bad priests hurting children even after the Catholic Church itself has wiped its hands clean of them. The attackers thrive because they continue getting unearned trust from people who have been taught from a young age to respect religious leaders and never question them. 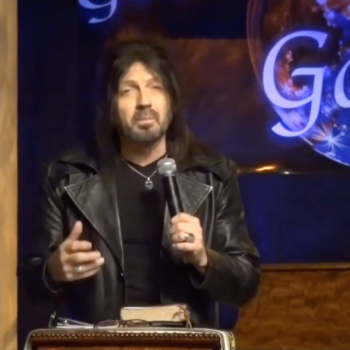 April 11, 2021
Evangelist: Joe Biden Should Tell the World, "I’m Not the Legitimate President"
Next Post

April 11, 2021 Tony Perkins: Getting Rid of the Filibuster Would Lead to the "End of America"
Browse Our Archives
What Are Your Thoughts?leave a comment