Congresswoman QAnon: Vaccine Passports Are the “Mark of the Beast” April 1, 2021 Beth Stoneburner

Congresswoman QAnon: Vaccine Passports Are the “Mark of the Beast”

Rep. Marjorie Taylor Greene, the conspiracy theorist and publicity hound who was banned from sitting on any committees because of her repeated support of violence against her colleagues, is still spreading lies that are designed to hurt as many Americans as possible.

This time, she’s going after the idea of vaccine “passports” — which make it clear that you’re inoculated against COVID when attending a concert, traveling abroad, or going to a restaurant — are actually the biblical “Mark of the Beast”:

Marjorie Taylor Greene says that a vaccine passport is "Biden's Mark of the Beast" and that any company the requires one is engaging in "corporate communism." pic.twitter.com/XtTvqw83tU

… I asked the question earlier today, is this something like Biden’s Mark of the Beast? Because that is really disturbing and not good… You see, it’s still the same thing. It’s still fascism or Communism — whatever you want to call it — but it’s coming from private companies. So I have a term for that. I call it Corporate Communism.

Somehow, an indication that you’re safe from a deadly virus amounts to Communism/Fascism/The Beast… but a government ID like a driver’s license or social security number is okay? Is Greene aware of all the health forms parents need to give their kindergartner’s public schools before they’re allowed to enroll?

Anyone who grew up in an evangelical home has likely been told that many things are the “Mark of the Beast.” (We’ve heard it said just this past year of the vaccine itself.) Things like tattoos, piercings, etc. Somehow, people have been getting their shots — and tattoos and piercings — without any notable Beast sightings.

If this is the best scare tactic anti-vaxxers have, maybe there’s hope we’ll recover after all. 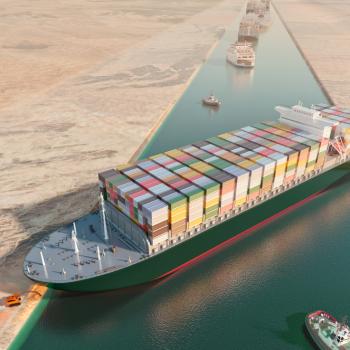 April 1, 2021
Franklin Graham: God Sent a Super Moon to Free the Boat from the Suez Canal
Next Post