On Saturday night, Bethel Baptist Church in Uniontown, Pennsylvania held a “Wild Game Dinner” that involved a sermon and feeding people what I assume are the carcasses of “Rabbit, Wild Pig, Squirrel, Raccoon, Muskrat and Beaver.” Not my thing, but there you go.

They also held a raffle at the end of the event. One of the prizes was a $200 voucher toward a fishing trip this summer in Canada to be led by Dan Lamb, the guest pastor (and guy who apparently loves shooting wild animals).

Emmy Smaniotto, who had been attending that Wild Game church event with her father for years, decided she wanted to take a chance on that bigger prize. She saw one other woman in the church throw her ticket into that bucket so she followed suit.

And wouldn’t you know it: The other woman was the first winner selected!

But as soon as her name was read off, Pastor Bryan Kelley told her she wasn’t eligible.

The pastor immediately declined the trip to the woman for “this is a mans only trip, sorry ladies”.

The second name pulled out of the bucket? Emmy’s. She wasn’t eligible either. She explained her frustration on Facebook:

I paid my $10 to attended just like every man, but don’t have the same privileges.

I have hunted and fished with many men in my lifetime and have been treated with respect while in the field – would this not be the same case if I attended the “church” fishing event?

Somehow this gets even worse.

The church defended its faith-based sexism by citing the Mike Pence/Billy Graham Rule: Avoid being alone with women who aren’t your wife because they’ll totally accuse you of rape.

… Living in the days of sexual scandals and accusations many pastors including myself, take the personal position that we will not put ourselves in a position that could bring about a false accusation and thus bring a multitude of problems, hence why he personally offered them for men only It was a matter of personal standards and protection and there was no intent of discrimination. So when the cards for those particular prizes were collected it was once again announced that the stipulation on behalf of the donor was for men only. Unfortunately, at least two ladies for whatever reason put their cards in that container although the stipulations were given twice and their names were drawn and declined because of the stipulations that were announced.

I spoke with the gentleman that offered the prize and he is more than willing to arrange a time for her and her dad to go out together and fish together.

See everyone? There was no intent of discrimination. They just couldn’t allow a woman to fish with a group of men because we all know what women will do, amirite, guys? Even though there would be multiple men on the trip. And even though women don’t just throw around false accusations for the hell of it. And even though Smaniotto said she would have no problem purchasing her own hotel room for the trip.

If there’s this much concern over sexual accusations, maybe the men shouldn’t be going anywhere.

The church has since taken down a copy of the sermon from Facebook, but they forget to remove it on YouTube. As Smaniotto noted on Facebook, there really is a moment when Pastor Lamb shows a picture of a Black preacher and says, “You can’t see him. He’s a Black man, so he hides in the shadows real easy, you know what I’m trying to say?” (Hilarious, these Christian jokes…)

When it comes down to it, though, what the church did isn’t unusual or illegal. Smaniotto is understandably frustrated — she wrote “Welcome to 2021 – where women are still treated unequal” — but this kind of sexism is baked into Baptist teachings. I’m surprised she wasn’t aware of it until now.

There’s no lawsuit forthcoming. There wouldn’t be. Still, there’s value to her speaking out about this because it just shows how the church will punish women for their mere existence even for something as petty as a raffle. The church isn’t doing itself any favors by saying they just wanted to avoid getting #MeToo’d.

It’s just another reminder for why no decent person should ever join a church like this. 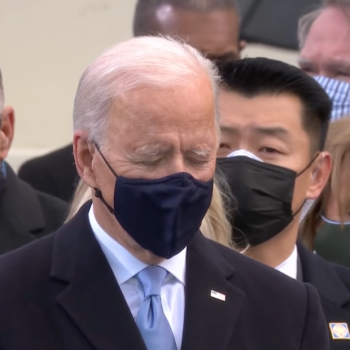 March 30, 2021
Survey: A Lot of Republicans Don't Think Joe Biden is a Legitimate Catholic
Next Post