In January, during a massive in-person Christian conference in Florida (where else?), a separate session was held for children… so that they, too, could pretend to be overtaken by the Spirit just like their parents.

Even though the Fire21 Kids Conference occurred in January, one of the speakers, Jenny Weaver, just posted video of the kids performing onstage.

If you ever need proof that charismatic Christianity brainwashes children, here’s some clear evidence. The first video is from January, but the second (from the same event) was just posted this week. Both of them are disturbing. (I have copies of the videos in case they’re taken down.)

***Update***: Both videos have been deleted, but mirrors are below:

***Update 2***: They’re trying to take down the mirrors, too, but I have the originals if anyone needs them.

It’s bad enough that these kids are imitating the gibberish of the insane adults around them, but watching them receive encouragement while they pretend to speak in tongues — as if they’re actually channeling God — is just faith-based child abuse. These kids deserve so much better than this.

It’s Jesus Camp all over again. Add lights and sounds and peer pressure and these kids will act however they think the adults want them to. Sadly, many Christian adults never grow out of that phase. 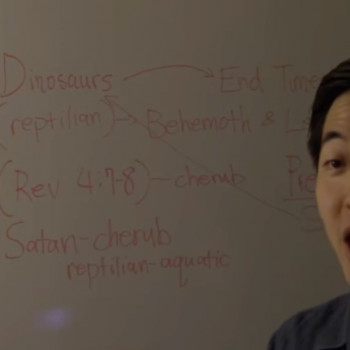