Christian evangelist Mario Murillo, who claimed last year that God sent Donald Trump to “save” people from Democrats and that none of the Capitol rioters “were Trump supporters,” is still in denial about what happened on January 6 as well as the past several years’ worth of demographic trends.

During a recent “Pastors’ Luncheon” in California, Murillo insisted there was no such thing as “Christian Nationalism” — even though there’s plenty of evidence of it and entire books written about it.

He made his point after a bizarre Seinfeldian prelude regarding — wait for it — Grape-Nuts.

There is no Christian Nationalism in America.

Let me talk to you for a moment… On January the 6th, that was a disaster. It shouldn’t have happened. But it wasn’t what the press said — that four people died. One died — and they even lied about one of the people that did lie.

And during his speech that day, President Trump said, “I want no violence and no breaking of the law.” And some of those people that were in that alleged insurrection were not even Trump supporters. They were leftist radicals paid to be there.

So all of these wispy, cowardly, disgusting pastors invent Christian Nationalism, paint with a broad brush against Trump supporters, and why on Earth would you want — look at me — why would you want to do that?

80 million people voted for that man. And you know what? They are the most fertile, soul-winning field in America. They are the ones that are most likely to walk to the front and get saved, because they love their family, they’re paying taxes, and God forbid that you should love America and the anthem!

What is wrong with these leaders? They’re so open-minded, their brains have fallen out.

And 80 million people did not vote for Trump. Murillo is off by several million. That’s another lie he’s telling his gullible Christian Nationalist audience.

A pastor who has long been a proponent of Christian Nationalism is pretending like he has no idea what it is. It makes as much sense as a white person insisting racism isn’t real because he’s never experienced it himself — buddy, step outside your bubble for a minute.

Murillo doesn’t get to pretend like the Christians who are violent, so-called patriots, or part of the MAGA cult aren’t True Christians™. They are whether he likes it or not — and he’s made it clear he’s one of them. 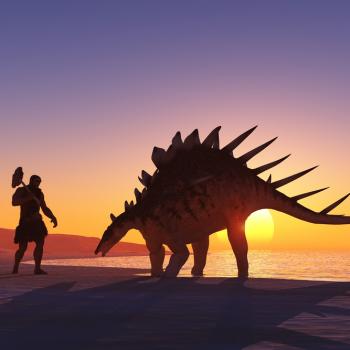 March 8, 2021
A Texas Newspaper Published an Essay Saying Humans and Dinosaurs Lived Together
Next Post

March 9, 2021 After Wrongly Predicting Trump's Second Term, a "Prophet" is Ending His Ministry
Browse Our Archives
What Are Your Thoughts?leave a comment