Two weeks ago, the men’s basketball team at East Tennessee State University kneeled together during the National Anthem in order to draw attention to systemic racism — as is their right — and it set off a firestorm in the Republican-dominated state. 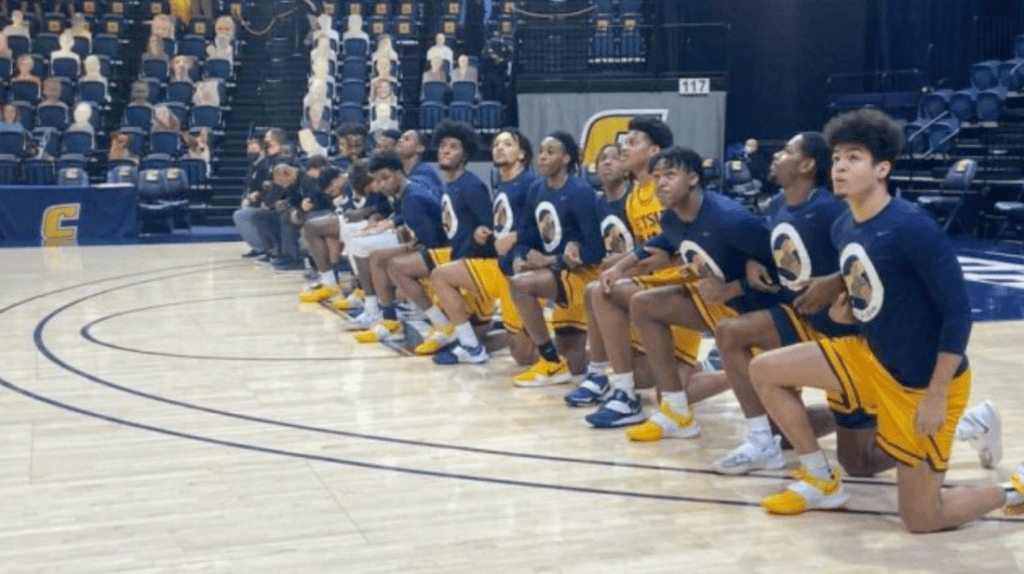 “This kind of activity will not be tolerated,” Crowe said.

Things took a darker turn last week when State Sen. Paul Bailey posted a letter on Twitter signed by every GOP senator and sent to every campus president in the University of Tennessee system:

… While we recognize our student athletes may express their own views on a variety of issues in their personal time, we do not condone any form of protest that could be viewed as disrespectful to our nation or flag while they are representing our state universities.

You know what’s more disrespectful to our nation than kneeling? Perpetuating racism, which is what these Republican legislators do through their policies and actions. Remaining silent during the anthem and pretending like our nation is always deserving of that respect are acts of ignorance. It’s not that you have to kneel — there are plenty of ways to express your concerns — but there’s nothing wrong with those who do it.

One lawmaker, State Sen. Jon Lundberg, said he wasn’t angry at the students, implying they were too immature to understand what they were doing, but he was furious at the coaches and administrators for allowing the students to express their First Amendment rights, as if playing for the school should deprive them of that ability.

“I give those students a pass because they’re 18, 19 years old, they’re very impressionable by a lot of things going on,” Lundberg said. “I’m not going to give a pass to the coaches, because they’re teachers, that is a teachable moment.”

“I’m not gonna give a pass to those presidents of those universities who are responsible for those coaches to take those opportunities to teach a lesson. A very strong one.”

It’s not surprising when Republicans say stupid things. But even I was shocked by what they put in that letter:

To address this issue, we encourage each of you to adopt policies within your respective athletic departments to prohibit any such actions moving forward…

“It’s perfectly appropriate for a state legislator to express concern to a state university president about any matter having to do with that university. The danger here is that this letter may be perceived as placing pressure on university administrators, because of course, the legislature holds the purse strings,” he said.

Harris said further, “If I had been advising them, if I’d been their lawyer, I would have strongly recommended that they not sign it.”

If the schools tell athletes they’re not allowed to kneel, they could face a lawsuit. It would be an utterly idiotic move to listen to these Republicans. But because the state controls the public university’s budget, those administrators are going to have to play a game where they don’t publicly upset those same morons.

Just this past week, ETSU officials sent their proposed budget request to the Senate Education Committee. If lawmakers retaliate by kicking the school in its pocketbook, that, too, could lead to more legal problems. All because a bunch of Republicans who know nothing about the First Amendment — and who think forced patriotism represents genuine love of the country — are sticking their noses where they don’t belong.

(via WJHL. Thanks to Brian for the link)

March 2, 2021 MAGA Cultist: "I’ll Admit It. I Want to Make It Harder to Vote in America."
Browse Our Archives
What Are Your Thoughts?leave a comment