Blasphemy is a crime in Poland and a conviction could land you up to two years in prison.

The latest victim of this victimless “crime” is Adam Darski (a.k.a. Nergal), a heavy metal musician who was charged with blasphemy for this 2019 Facebook post in which, before a concert, he stepped on a picture of the Virgin Mary.

His conviction came after conservative legal group Ordo Iuris and an organisation called the Patriotic Society said that Nergal had offended four people, according to state broadcaster TVP Info.

An expert in religious studies told prosecutors that “treading with a shoe on the image of the Mother of God is an offence against religious feelings”, said the spokeswoman for Warsaw district prosecutor’s office, Aleksandra Skrzyniarz.

The reason Darski is fighting this is because pushing back against religious authority has always been part of his schtick. He’s been sued for ripping up a Bible, setting fire to crosses on stage, and singing in positive terms about the murder of a Catholic saint. It’s all free speech, hurting nobody and using his own property, even if that form of speech isn’t to your liking.

None of it justifies a financial penalty, much less a jail sentence.

In a video posted this week, Darski said the blasphemy law was just an excuse to “harass me under the banner of Catholic dogma.”

He’s now raising money for a legal defense — for him and other convicted of the same dumb crime — hoping to scare away the people coming after him. He’s already reached his goal thanks to over 1,100 donors, but anyone can still chip in.

I hope it helps. In 2019, a Polish woman was arrested for hanging up a poster of the Virgin Mary with a rainbow halo. Earlier this year, three other women were arrested for the same thing. In 2012, a pop singer was fined for saying in an interview that she doubted the Bible because it came off as “written by someone drunk on wine and smoking some herbs.”

I could go on like this for a while. Humanists International said in its latest Freedom of Thought report that Poland was ranked 97th in the world in that regard. (The United States was #24.) They added that those who insult Christian symbols tend to be punished more harshly in Poland than other kinds of “blasphemy.” 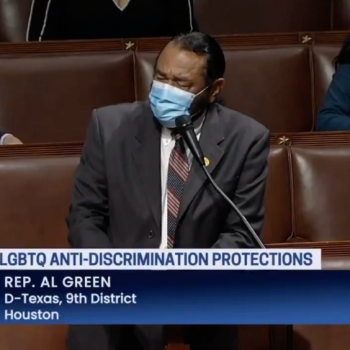 February 26, 2021 Christian Evangelist: Biden, Who's "Not the President," Is Blocking Prophecy
Browse Our Archives
What Are Your Thoughts?leave a comment