Imagine being the senator who Bible-bashes so hard, even other Republican senators tell you to tone it down a notch.

The subject of the debate was an anti-abortion “heartbeat bill,” but Cash devoted most of his time and rage to ranting irrelevantly about human rights advances that grant equality to LGBTQ people.

Warning his captive audience that he intended to “get theological,” Cash dismissed much of America’s civil rights history as an affront to his deity:

We are in a slow, downward moral decline in this country that was accelerated in the 1960s and continued to this day. I am going to get theological. I believe, as a nation, we are in rebellion against God and God’s moral law. Just flat out rebellion.

If extending equality to people who aren’t white, straight, cis, or male constitutes rebellion against God, perhaps that is a sign that you should reconsider your God’s moral compass.

The way Cash sees it, though, the only reason more of us aren’t up in arms about LGBTQ rights is that we’ve “become numb” because of the speed of social change:

It wasn’t too long ago that this body — I wasn’t here — but they passed something about marriage, defining marriage between a man and a woman. The Supreme Court came along and said ‘no, no, no, anybody can get married. Two men, two women. We’re going to throw out everything we know about marriage and human history. We’re going to throw out all the state laws that might regulate or govern this ancient institution.

We don’t think about that anymore. It’s always on to the next thing in this downward spiral. Now we’re talking about transgenderism, and it’s frankly so crazy.

Biden has called trans rights “the civil rights issue of our time.” Cash calls them “just one manifestation” of America’s “rebellion against God’s moral law.”

But there’s no place for “God’s moral law” in the debate over human rights, nor in America’s lawmaking bodies. And it was Republican Senator Sandy Senn (Charleston) who made that perfectly clear, addressing Senator Cash pointedly:

Do you know we are not in the church? We are in the South Carolina Senate, where there is a separation between church and state… I am a colleague in the Senate. I am not a member of your flock.

Even without Cash’s rant, there’s no getting around the presence of religion in a senate debate questioning whether to ban abortion after six to eight weeks’ gestation. But I suppose at least Senn had the sense to keep the mixing of church and state on topic.

Some of South Carolina’s most prominent LGBTQ organizations have banded together to categorically condemn Cash’s remarks. Chase Glenn, spokesperson for the Alliance for Full Acceptance, pointed out that hateful remarks from a state senator are more than just mere hate speech because they carry the weight of legislative power:

[Senator Cash] has a long history of pushing legislation that would threaten the lives and dignity of LGBTQ people in our state. His language and actions only divide our state further, when we should be working harder than ever during this time of national crisis to come together, tackle our shared problems, and build communities where every South Carolinian can thrive.

Treating all people with respect and fairness — whether by protecting LGBTQ people from discrimination, ensuring vulnerable transgender youth are supported, and celebrating love and commitment between same-sex couples — lifts our society up and brings us closer to our nation’s promise of liberty and justice for all. Sen. Cash’s speech, however, advocated for the erasure and marginalization of LGBTQ people and was immediately harmful.

Glenn went on to offer “a message of love and support” to LGBTQ people and groups across South Carolina, along with a promise to continue fighting back against messages of hate like the one Cash delivered. 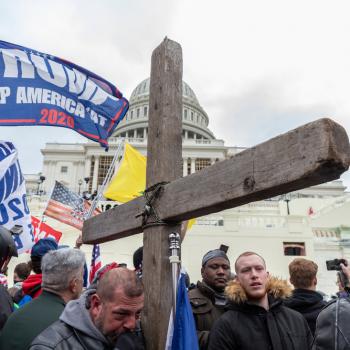 February 6, 2021 Pastor: The Election Was Stolen Because Christians Weren't Political Enough
Browse Our Archives
What Are Your Thoughts?leave a comment