A Priest on YouTube Called Out “Pro-Life” Hypocrisy and Viewers Were Furious February 2, 2021 Hemant Mehta

Casey Cole is a young Franciscan priest who, among other things, makes YouTube videos discussing his faith. There’s nothing weird about that. You also won’t be surprised to hear he’s fairly conservative in the same ways as the Catholic Church.

That’s why it shocked a lot of his fans when he posted a video last week suggesting abortion had become the “most important issue” for many fellow believers… and he believed it shouldn’t be.

To be clear: He’s against abortion rights. His concern is that a lot of Catholics were so fixated on banning the practice under the previous president… that they were willing to ignore a number of other travesties.

… Over the past decade, I have grown more and more disappointed in the so-called Pro-Life movement that seems to care only about one issue of life and yet has so readily aligned itself with the economic and social issues of the Republican party. I see Catholics so enflamed with passion for this issue that they are not only willing to collaborate with repugnant politicians and fundamentalist Christian theologies, they are willing to cheer them on, even look for ways to support them.

Getting Supreme Court justices that will possibly overturn Roe v. Wade became such a god to some that they were willing to uncritically support justices that also allow for affronts to the human family in other ways, that are more aligned with conservative economics than with life issues.

In this case as well, their actions betray them: the issue of abortion in so many Christians has become more important than true discipleship.

When push comes to shove, there are more than a few people who have done extremely un-Christ-like things in order to gain ground on this issue. Which, should absolutely leave us with something to ponder.

If gaining ground on an issue requires you to do something that Christ wouldn’t do, if it requires you to violate the Ten Commandments, ignore the beatitudes, or turn from God, for even a second — and you do it anyway — it might be time to reevaluate your priorities.

No issue — not the environment, not racism, not poverty, not even abortion — can be at the center of who we are.

All of that makes perfect sense. The same “pro-life” evangelicals and Catholics who championed forced birth supported a president who executed prisoners until his final moments in office, left more than 400,000 dead from a pandemic he refused to take seriously, separated refugee children from their parents, used tear gas against protesters on his way to a church for a pathetic photo-op, and led an insurrection attempt. When it comes to the Supreme Court, Donald Trump nominated an alleged sexual predator. The Republican Party also rammed through another replacement justice in the month before the election — something they insisted President Obama could never do in his final year.

Was all that really worth it for the “pro-life” crowd? That’s what Cole wants to know.

His video is appreciated in that regard. He’s calling out the anti-abortion crowd — his crowd — for causing so much suffering in the name of life.

But the video did not go over very well in the Catholic part of the internet… or in the YouTube comments section. Members of the Catholicism subreddit described Cole as “going off the rails” and “Disingenuous.” Facebook critics angrily shared the post as if Cole was a heretic. Critics also pounced on his original title, “Abortion is not THAT important.”

It led to Cole making a follow-up video trying to explain himself further.

In terms of his argument, nothing changed. I honestly don’t think he needed to waste his time. But he describes the hateful messages he received from many different people — many of whom, he says, didn’t even watch past the beginning of the video. (That’s easy to tell via YouTube’s analytics.)

He also reiterates his belief that abortion is the “most disgusting thing on the face of the planet”… which I’m sure he thinks he needs to state, but which also downplays actual tragedies like the Holocaust.

Still, it would be good if viewers took his argument at face value: If the point of the faith is to follow Jesus, but you think opposing abortion is a part of that, how many actual lives are you willing to sacrifice to get there? And if the policies of Joe Biden lead to lower abortion rates, as is often the case with Democratic presidents, would single-issue abortion voters support him?

Conservative Catholics are hypocrites. And now a bunch of them are mad at a priest for calling them out on it. 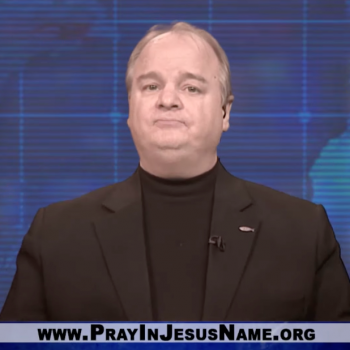 February 2, 2021 Klingenschmitt: The White House is Currently Being Run By the "Devil’s Will"
Browse Our Archives
What Are Your Thoughts?leave a comment