During an appearance today on Trinity Broadcasting Network, evangelist Franklin Graham, a Trump sycophant who recently condemned the 10 Republicans who voted to impeach him and compared them to Judas, said it was unfair for anyone to claim Christian Nationalists were involved in the Capitol siege.

Sure there were Christians outside, he admitted, but none of those Christians entered the building!

Franklin Graham just said, "The Capitol, when it was attacked on the 6th, I know that a lot of media are trying to spin this that Christians were behind it" but that he's watched many videos of the attack and that's not what he saw… pic.twitter.com/yVsjn8eucD

The Capitol, when it was attacked on the 6th, I know that a lot of media are trying to spin this, that Christians were behind it. I’ve been interviewed where they said there were Christian [symbology] out in the crowd, where there were people that said — that held signs that says “Jesus Saves.” They said the people attacked the Capitol.

I’ve watched many long videos of the attack on the Capitol. I saw American flags. I saw Trump flags. I saw one Rebel flag. But I didn’t see any “Jesus Saves” flags or signs inside the Capitol. I saw them out on the Mall. And so I know there were Christians… Our goal is not to attack or to burn or to destroy. Our goal, as Christians, is to build up and to strengthen. And we want to build up America. We want to strengthen America.

Somehow, Graham must have missed the most viral video from inside the Capitol, in which the terrorists paused their ransacking of a Congressional chamber in order to say a prayer to Jesus.

As I said last week, those weren’t just terrorists. They were Christian terrorists. The prayer they recited was one that wouldn’t be out of place at evangelical churches across the country. Which is to say, if you didn’t know the context, it would be easy to see Graham delivering that very prayer.

To pretend Christians weren’t involved in the terrorist attack on our Capitol is just more willful delusion from a man whose entire career has been dedicated to spreading lies. 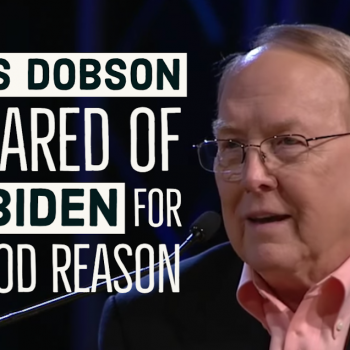 January 20, 2021
Conservative Christians Have a Bunch of Irrational Fears About a Biden Presidency
Next Post