An anti-vaxxer who became a poster child for the movement is now urging parents to vaccinate their kids and stop believing the anti-scientific lies. She’s even explaining what caused her own change of heart.

This whole saga began in 2019. When Halloween parties were still possible, Autumn Dayss dressed up as something truly frightening: an anti-vaxxer. Carrying a tiny skeleton, she said she was attending a costume party as “Karen and her non-vaccinated child.” Clever. (And also controversial for some people who thought she was making light of dead babies.)

The costume really didn’t sit well with Texas mother Heather Simpson, who opposed vaccinations. She shot back on Facebook by posting her own costume, which she claimed was the “least scary thing” imaginable: the measles. 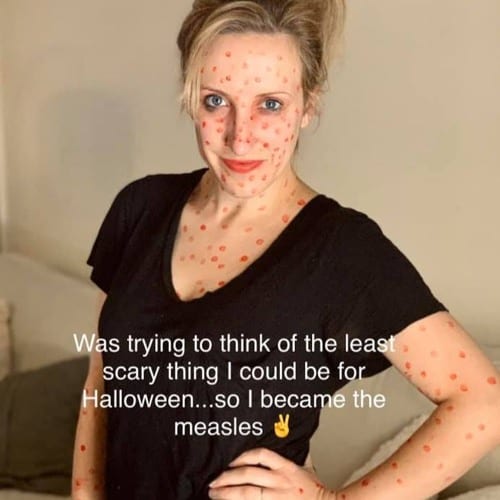 That post went viral (ha) as you’d expect — and as she had hoped. Simpson was a hero to the anti-vax crowd and a target for those who saw her as making light of a disease that killed millions of people each year before a vaccine was developed. The virus was nearly eradicated in the United States, but anti-vaxxers like her, spreading baseless lies, brought measles back. 207,000 people died of the preventable disease in 2019.

But here’s a rather shocking update for you: Today, Simpson posted an update on Facebook explaining that she was no longer an anti-vaxxer.

Her post is lengthy, but here’s the gist of it: Simpson explains that she was vaccinated as a child and never had a problem with those shots… until she watched an anti-vaccination documentary a couple of years ago. She believed its claims. She fell for its lies. She believed vaccines “could and would cause autism, SIDS, autoimmune diseases, and death in general.” It was very easy to find confirmation of her views online, so she continued down the rabbit hole.

When her child was 18 months old, in 2019, she began posting publicly about those views. She says she slow-played it in order to not turn people off completely. Even though she was vehemently against vaccines, she claimed she was simply vaccine “hesitant.” But even that “I’m just asking questions” perspective won her a lot of new fans:

I was shocked. Friend requests started pouring in. I didn’t know what was happening. So I kept posting my views on vaccines, people kept sharing my posts, and my audience grew. It was wild and completely unexpected. I had no idea that this world of anti-vaccine moms and dads existed on social media.

That audience hit its peak shortly after the viral Halloween post — as did the backlash.

So what changed her mind? It was a number of things:

… I was relying on western medicine to treat my endometriosis, I had just had surgery, and had been studying vaccines from a different standpoint. I started to soften my anti-vax views. But when I posted about this softening of my views, a lot of the anti-vax crowd lost it on me. They were furious and just plain cruel.

Surprise. The cult turned on her when she started accepting science and reality. That certainly didn’t help her want to remain within the fold. But that alone didn’t push her away. She was never an anti-vaxxer because of the other people. She was also never anti-science. She was simply scared. She believed that vaccines would hurt her child, and she would do anything to prevent that.

It was only when she began researching the horrifying anecdotes people shared online that she realized vaccinations weren’t the problem. A lot of people were just falling for the “Post hoc ergo propter hoc” fallacy.

… I started to see that a lot of the “vaccine deaths” were actually due to co-sleeping accidents or other underlying conditions. The timing was just very, very unfortunate. The whole situation was sad. But vaccines inevitably took the blame.

… But the problem is, [anecdotes] without proof can get out of hand quickly in the hands of social media. Susie could have broken her leg on the swingset the day after her tetanus shot, but the way Susie’s mom told it on social media was that Susie got her shot, and now she can’t walk. Then this post gets spread 20,000 times. You now have a bunch of parents not wanting their child to get the tetanus shot because of COURSE they don’t want to risk their child losing their ability to walk.

It’s not just accidents. As scientists and doctors would tell you, babies go through a lot of major changes in a very short time period. It’s easy to think one change causes another. Vaccines are an easy scapegoat for anything that seems to go wrong during infancy or childhood.

Simpson also discovered that some of the most damning anecdotes — when vaccines really did do damage — were quite literally the statistical anomalies. When something is 99.9% effective, that 0.01% can get blown out of proportion.

Then there were the ingredients. Anti-vaxxers often claim certain ingredients in vaccines — Mercury! Aluminum! Formaldehyde! — are basically poisonous… even though scientists will tell you the amount of those ingredients is so minimal that they would not cause the kind of damage attributed to them.

So the anti-vaccination anecdotes weren’t holding up. The science seemed to support vaccines, too. But what really tipped the scales, Simpson says, were the people who reached out to her with kindness instead of malice:

… what finally changed my mind, was having people reach out, listen to my fears, and talk to me. The thousands of mean comments didn’t change my mind. In fact, those comments made me think I was even more in the right. If I had enemies, after all, then I must be doing something right. Those awful comments had the [opposite] effect of the pro vaccine person’s intentions.

But when friends calmly and patiently explained the science to me, showing they cared more about me than about changing my mind, my mind started to open up to the fact that I could be wrong…

Readers may recall that Megan Phelps-Roper left Westboro Baptist Church for a similar reason; it took someone willing to engage in dialogue with her — not argue or fight — before she could come to her senses.

Finally, Simpson says she went through her own medical crisis last year and realized the doctors and nurses who helped her weren’t part of some vast conspiracy. Western medicine wasn’t out to get her. There wasn’t some secret plot underway.

She is now trying to make amends for her past — not just for urging people not to get vaccinated, but for suggesting that autism was a problem to avoid at all costs.

I want to apologize for anybody I hurt during my anti-vax days. I was harsh, sarcastic, and extremely hurtful. I know that there is a lot of ableism in the anti-vax movement, so just know this: your autistic child was born perfectly. Do not let anyone tell you that they need to be cured or fixed. I am so sorry if I ever promoted ableism. That was never my heart or intent, of course, but I am sorry if I did regardless. I would like to ask the pro vaccine and medical community’s forgiveness for my flippant attitude, my Dunning Kruger effect that I put on like a a pair of shoes daily, and my measles costume that looked more like syphilis. I am so sorry.

Simpson says she’ll soon get her flu shot — and the COVID vaccine when she’s eligible for it. Her child, too, will be vaccinated on the pediatrician’s recommended schedule.

Good for her. It takes a lot of courage to publicly own up to your mistakes, but the most we can ask for is that someone who may have caused damage for their beliefs takes ownership of that and sincerely works to help others join her on the other side. Simpson is doing that. In fact, she’s already invited a local news crew to watch her get the flu shot in the hopes that people who are anti-vax may be encouraged by her own shift.

I had a chance to chat with her this afternoon about her shift, and she told me how her stance on vaccinations isn’t the only shift she’s going through. She attended a conservative, Trump-supporting Baptist church before the pandemic. They closed down when the pandemic arrived and shifted services online — which is good — but they reopened in July. While members of the congregation have to wear masks, Simpson has no desire to go to any kind of in-person gathering. She’s listening to the scientists when it comes to COVID. Along the way, she’s also moving away from the church’s other hardline conservative views on everything from the role of women, to abortion, to politics.

She also told me she had a message for the pro-vaccination crowd (of which she’s now a member): As eager as we may be to criticize anti-vaxxers, she believes it emboldens them. We’re doing damage to our own cause if we mock them, curse them out, threaten them, or treat them as mindless. She’s been on the receiving end of all of those kinds of comments and she knows how little it did to change her own mind.

“This is so important that it could end the pandemic,” she added. Be kind. Understand that those anti-vaxxers are often less interested in embracing conspiracy theories and more just scared for their kids. If we go into any conversations with that in mind, it could help us help them move away from the brink of danger. 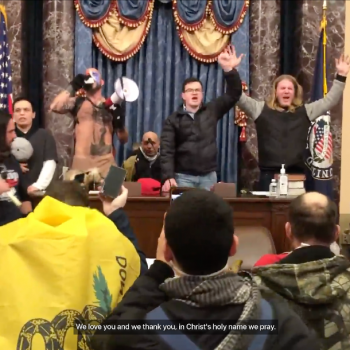 January 17, 2021
There's Video of Christian Terrorists Praying to God Inside the U.S. Capitol
Next Post 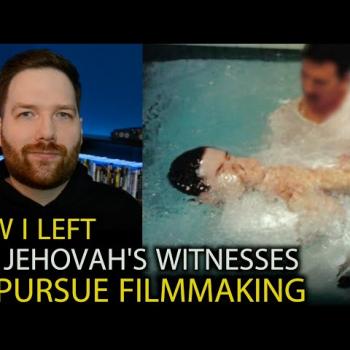