The Atheist Running “Democrats for Life” Sounds Like a Typical Republican

I’ve said before that I want to see more atheists in political power, but that wouldn’t really matter unless they were advocating the values most of us share, including support for church/state separation and advocacy of science. Personally, I can’t imagine an open atheist in the current Republican Party earning my support because the GOP is inherently opposed to my own values. (Hell, they’re against democracy itself at this point.)

So it’s interesting to see that an anti-abortion group called Democrats for Life now has an openly atheist president.

Terrisa Bukovinac describes herself as “atheist, feminist, vegan, Democrat, and a consistent life activist.” She leads a non-profit with a relatively small budget (under six figures annually, according to their most recently filed 990) which could grow larger in the coming years if they have more influence.

She’s spoken before, very unconvincingly, about why her atheism is compatible with her desire to control other women’s bodies.

Still, there’s a way her group could get traction within a party that’s committed, at least on paper, to expanding women’s rights. The group could focus on the factors that often lead women to seek abortions as a way to reduce the need for them. They could support comprehensive sex education, access to contraception, affordable or free health care — and they will tell you they do all that.

But they also adopt many of the same arguments used by white evangelicals and conservative Catholics, limiting any credibility they might hope to find on the left.

In a recent interview with the Catholic publication Crux, check out some of the language Bukovinac uses to describe her beliefs and goals. It’s no different than the garbage you’d find on a right-wing conspiracy website:

San Francisco is the home to the University of California San Francisco which is the late-term abortion training capital of the U.S.… The Bay Area is home to [Speaker Nancy] Pelosi and [Sen. Kamala] Harris, and is where David Daleiden is being prosecuted by Xavier Becerra for exposing fetal tissue trafficking in California.

While it’s easy to feel totally discouraged by the blatant abortion extremism emanating from our party, the reality is that the most substantial source of power for the abortion industry as a whole is the Democratic Party…

Late-term abortions are a rarity and almost always occur in dire situations.

Daleiden faces criminal charges, “exposed” no wrongdoing, and a jury eventually awarded Planned Parenthood over $2,000,000 for what he put them through (though that’s on appeal). His problems began when he released heavily edited and misleading videos, which you would think would be troubling for people claiming to value reason and rationality.

And “abortion extremism” isn’t a thing; it’s just baseless fear-mongering. Democrats are not forcing abortions upon anyone. They’re not calling for more of them as if to meet some imaginary quota. They’re not waiting in delivery rooms with a guillotine. Most elected Democrats want to make sure women who need an abortion can get one safely; that’s the extent of the supposed “extremism.”

In other words, if you didn’t know who was speaking, you would very well assume this was a right-wing Christian who supports Republican candidates. And if that’s the case, then the group’s claims that it only supports “pro-life” Democrats ring hollow. It’s not that they’re lying about being anti-abortion Democrats; it’s that they’re not offering anything unique even though they absolutely could.

I also laughed out loud at this comment from Bukovinac, because it’s such a clear indication of right-wing conspiracy-brain thinking:

… we should be excited to see Tulsi Gabbard, a progressive millennial woman of color, a high-profile former presidential candidate, breaking party lines to champion common-sense protections for infants born alive during abortions and pain-capable fetuses beyond 20 weeks.

Gabbard indeed introduced anti-abortion legislation that has no chance of passing. She also recently introduced anti-transgender legislation. In other words, she isn’t “progressive” in any meaningful sense of the word. There’s a reason she gained no traction during the presidential primaries last year, even after other progressives dropped out.

If she’s your idea of a good Democrat, well, feel free to follow her out the door. (To Tucker Carlson‘s show, apparently.)

Or take the route of one of the group’s most prominent allies, Rep. Dan Lipinski, who’s anti-LGBTQ as well as anti-abortion, and who just lost his primary this year to an actual progressive candidate. (Marie Newman went on to win her general election race.)

Even if her political sensibilities are backwards, Bukovinac also founded and runs a group called Pro-Life San Francisco. We posted about that group in 2018 when members harassed a sanitation worker who stopped by a local Planned Parenthood to do his job. As we said at the time, that’s like taking your frustration against Chick-fil-A’s anti-gay owners out on the employee working the cash register. There’s no compassion there. There’s no understanding of the issue. It’s just pointless and cruel.

But the group isn’t just about her. Bukovinac cites numbers suggesting there are far more anti-abortion Democrats than people think:

A 2020 Marist poll shows 58 percent of Democrats support restricting abortion to after 6 months, earlier, or non-elective circumstances. According to Gallup and Pew polling there are still roughly 21 million Democrats who actually call themselves pro-life!

In fact, that same poll shows Democrats are overwhelmingly supportive of abortion rights. It says only 14% of Democrats would support a candidate who says abortion should be restricted to the first six months. Only 13% of Democrats would back a candidate who wanted to permit abortions only in non-elective circumstances. (And I suspect those numbers are high anyway, since you’re more likely to offer leniency to a candidate you like on other issues than holding those positions yourself.)

And while Gallup found 24% of Democrats would consider themselves “pro-life” — that’s presumably where Bukovinac got her 21 million number — the phrasing doesn’t necessarily mean all those people agree with her on abortion policy. (Hell, I could easily call myself “pro-life.” That’s why I oppose the death penalty and don’t want to ruin women’s lives by forcing them to give birth against their will.)

Anyway, there’s nothing necessarily hypocritical about the group’s existence, or even an atheist running it. But when the organization is spreading many of the same lies we’re used to hearing from Republicans, you have to wonder why they even bother wasting their time. 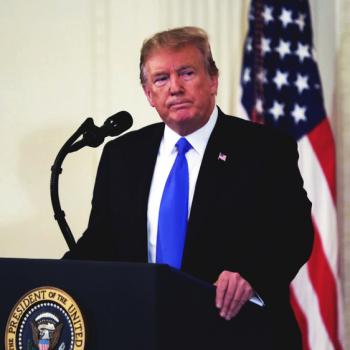 January 13, 2021 Evangelical Christians Make Up About Half of Trump's Most Hardcore Supporters
Browse Our Archives
What Are Your Thoughts?leave a comment