A Creationist is Angry He Can’t Get a Grad School Degree in Creationism January 12, 2021 Hemant Mehta

In 2007, the Institute for Creation Research — yes, that’s really a place — wanted to offer a Master of Science degree with a major in Science Education in the state of Texas. In order for that degree to have more value than a sheet of toilet paper, however, a school needs proper accreditation.

They didn’t get it because they didn’t meet basic science standards. How could they? They don’t teach science. They make up stories that align with their fundamentalist interpretation of the Bible and pass it off as science.

ICR then filed a lawsuit against the Texas Higher Education Coordinating Board claiming they were victims of religious discrimination. They lost that case in 2010.

It didn’t take long for ICR to close its grad school. It still offers a Master of Christian Education degree through its School of Biblical Apologetics (because the state doesn’t regulate how Christian schools teach Christian myth).

The year all that drama went down, a man named Chris Ashcroft wrote an article for Creation Ministries International’s Journal of Creation in which he complained about how his attempt to get a graduate degree in Creationism was hampered by Texas refusing to grant accreditation to the school.

The recent court ruling (against the ICRGS) that Biblically based science does not qualify to be called “science” is nothing short of religious discrimination. With similar rulings against Christian institutions being seen around the globe, it is clear that we will soon see the end of Christian education if people do not act.

It’s been a decade since he published that article, and Ashcroft just recycled it for a local website called AllOnGeorgia. Even the citations haven’t been updated… which is just *chef’s kiss* for something written by a Creationist. Why bother updating the story with new information when you’re stuck in an old way of thinking?

In any case, to answer the question at the top of his article — “Is there a future for Christian education?” — of course there is. There’s value in learning about Christianity. But there’s no educational value in treating fiction as fact, or pretending that religious mythology is a valid substitute for science.

No one deserves credit for getting a degree in bullshit.

(Image via Shutterstock. Thanks to Brian and Dan for the link) 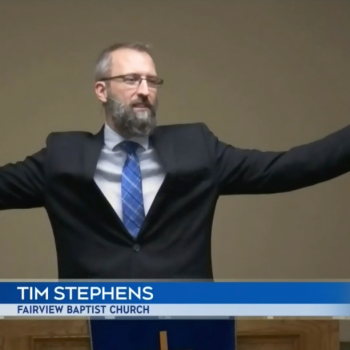