Conspiracist: Don’t Blame Antifa for the Siege! “American Patriots Did This!”

Conservative activist and conspiracy theorist DeAnna Lorraine, last seen claiming she wouldn’t get a COVID-19 even if Jesus were to take it, has some not-so-surprising thoughts about the right-wing riots at the Capitol earlier this week.

Any person, right or left, with a moral compass would condemn what happened during that siege. But not Lorraine, who called the rioters “patriots.”

“This had to be done,” Lorraine added. “We had to level up our level of resistance and fighting back or we’ll never, ever, ever fight back and never get what we want, and we will be deserving of this government, this tyrannical government. So, let me say this: It is time — because we have tried every means, we’ve been nice, we’ve been polite, we’ve followed the rules, we’ve exhausted our legal means and our civil means, we’ve done all of that, and nothing has worked — so it is time [for] a show of force. Yesterday was symbolic, and I hope that this is the start, where we level up our show of force, where we level up our show of fight and bravery and real courage. Yesterday was symbolic, and I hope that people start seeing it as heroic and jumping in on the action and that it’s contagious — because we need more of it, not less. We need more of what happened yesterday, not less. And do not let the media brainwash you into thinking yesterday was some bad or evil or shameful thing. When I look at the images of what happened and the videos, because I was on the ground and I saw what happened and what we went through, I am proud. I’ve never felt more pride in my heart and soul than yesterday by seeing these images. And you should be proud too. And if you’re not, then you were never a real patriot, and you were never down for the cause and never wanted to fight.”

Republicans have been trying unsuccessfully to blame the violence on Antifa. Never mind that this entire event happened because Trump himself called for it for, oh, the last four years or so. I guess they’re not Antifa after all…

Of course, if half the shenanigans that took place were done by people associated with Black Lives Matter, Lorraine would undoubtedly condemn it. It’s just more predictable behavior from people who have overturned our understanding of reality.

Violence is bad… except when you don’t get your own way.

Respect police officers… except when they try to stop you from having a public temper tantrum.

Immigrants are a supposed threat to national security… even though white supremacists pose the greatest terror threat.

So much for all that “winning.” 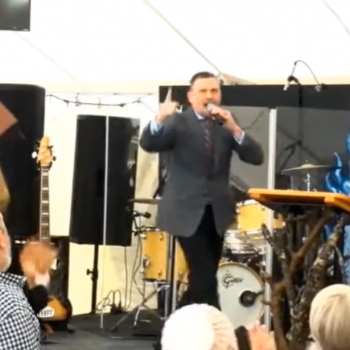 January 9, 2021
Hate-Pastor Who Still Thinks Trump Will Win: God Will Dethrone Democrats in 2021
Next Post