Rep. Emanuel Cleaver delivered the daily congressional prayer (yes, that’s a thing) on Sunday, and like so much of what Congress is doing this week, it should have been a formality with little fanfare. Instead, Republicans are making a huge deal out of it because Cleaver ended his remarks by saying “Amen… and A-woman.”

Was it a dad joke? A play on words? A nod to the women in Congress, including Nancy Pelosi, who was re-elected Speaker?

Cleaver told the Kansas City Star it was a play on words in honor of the “record number of women” in Congress. He’s a minister, after all. He knows “Amen” isn’t a gendered word.

“I concluded with a lighthearted pun in recognition of the record number of women who will be representing the American people in Congress during this term as well as in recognition of the first female Chaplain of the House of Representatives whose service commenced this week,” said Cleaver, who led the search committee that selected Grun Kibben, the former chief chaplain of the Navy, for the role.

And yet it’s become the latest version of President Obama‘s tan suit — a non-issue that conservatives flip out over anyway because they have nothing substantive to criticize.

.@RepCleaver from MO opened the 117th Congress in prayer yesterday, but he closed his prayer by saying, “Amen and a-woman.” I suppose he was trying to use this time of prayer to make a political statement about gender issues. Not a great start for 2021. https://t.co/ZbwQ77cIfl

AMEN…AND AWOMEN? Between Rep. Cleaver’s comment and the new Dem House rules on the words “mother” and “father,” it’s become clear that wokeness has infiltrated our government. TONIGHT we’ll call out the radical Left. Tune In "Hannity" at 9 PM ET! https://t.co/wZOg9gtvFP

.@DonaldJTrumpJr: “Amen and awomen… It tells you everything you need to know about the Democrat Party… these people are freaking morons." pic.twitter.com/LokgTE1ovE

Cleaver made a pun. Republicans turned it into a scandal… because that’s what they do. Considering all the things they ought to be offended by — like Donald Trump‘s pathetic attempt to overturn the election results — it’s telling how they’re making this into a controversy while ignoring the very real threats posed by members of their own party.

Ironically, if you listen to Cleaver’s full speech, he talks about the importance of peace and the danger of tribalism. It’s clear Republicans didn’t hear any of that.

January 4, 2021
Nebraska Preacher: God Is Mad at Sen. Ben Sasse for Not Backing the Coup Attempt
Next Post 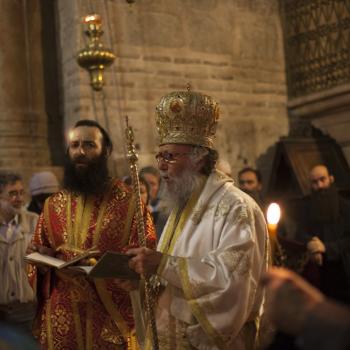