The Religious Makeup of the 117th Congress Includes a Few Surprises

With the new members of Congress now officially seated, we can once again look at the religious makeup of our government and see how representative it is of America as a whole.

The Pew Research Center, which issues a report on the religious makeup of Congress every two years, just released its latest version this afternoon, taking data from a CQ Roll Call questionnaire.

Here’s what we now know about the religious affiliations of the 117th Congress. 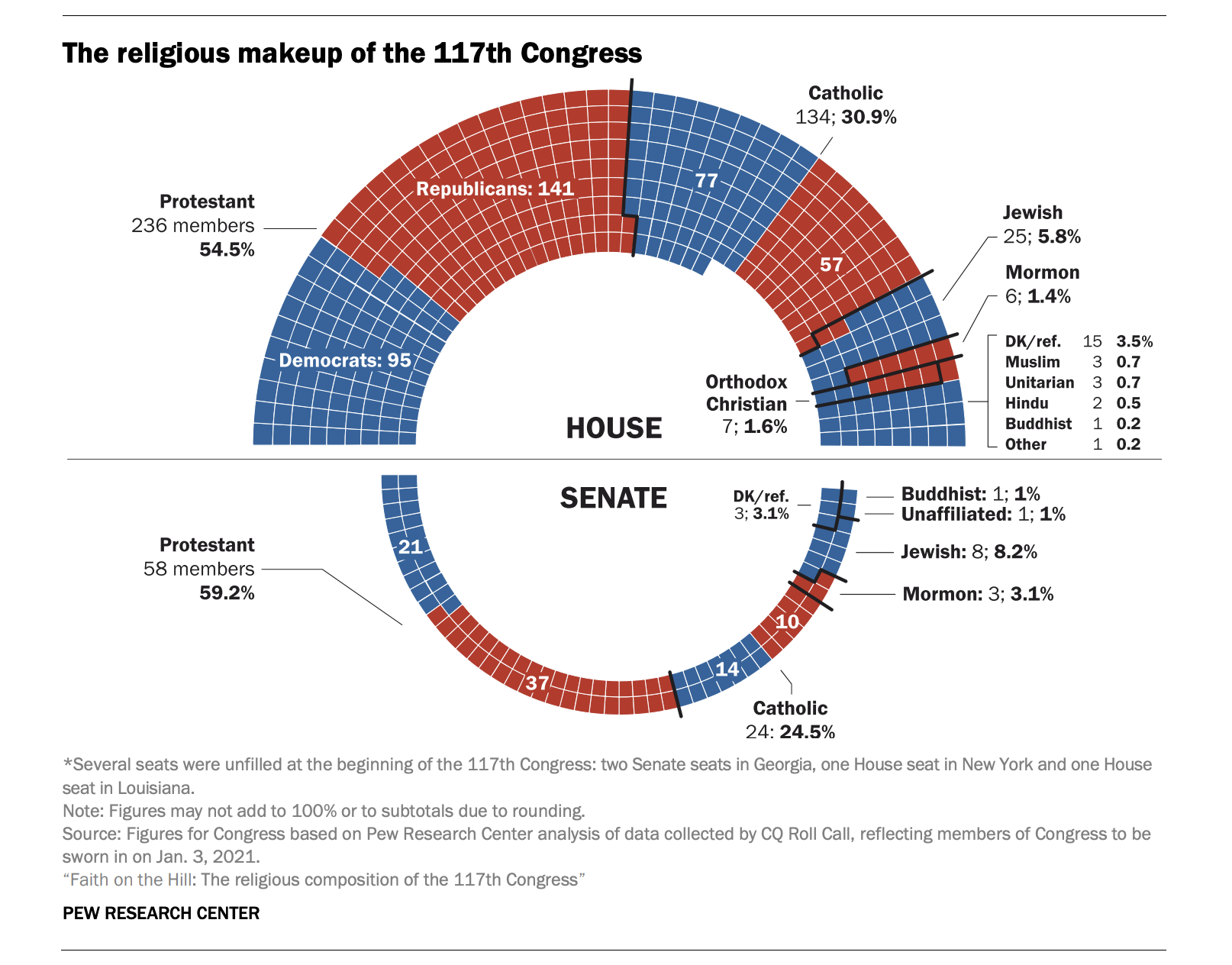 It’s overwhelmingly Christian with a smattering of Jews, Muslims, Hindus, and followers of other faiths.

But here’s some exciting news for people who get excited by this stuff: There’s finally a humanist on the list. Rep. Jared Huffman, who first came out as a non-theistic politician in 2017 then made it “official” (through the CQ Roll Call data) in 2019, is listed here for the first time as… “Other.”

There is also one member listed once again as “Unaffiliated”: Sen. Kyrsten Sinema (D-AZ).

Pew notes that “Fewer than three-tenths of 1% of U.S. adults specifically call themselves humanists”… so in a weirdly specific (and ultimately meaningless) way, humanists are also under-represented in Congress.

Before you give Sinema credit for being a “None,” remember that when asked if she was an atheist when she was first elected to Congress in 2012, her spokesperson dismissed the label by saying, “Kyrsten believes the terms non-theist, atheist or nonbeliever are not befitting of her life’s work or personal character.”

Jamie Raskin (D-MD) is one of the co-founders of the Congressional Freethought Caucus, along with Huffman, but whatever he believes in private, he uses the label “Jewish.” It may be a secular form of Judaism, but on paper, there’s no distinction. His approach echoes that of former Rep. Barney Frank. After Frank left office, he said that while he didn’t believe in God, he also didn’t like the word “atheist” as a descriptor for himself and never used it, in part, out of fear that the Jewish community would see him as anti-Semitic. Raskin said in 2016 that he was “one hundred percent Jewish,” “emphatically Jewish,” and that “I’ve never called myself an atheist.” Ironically, none of that means he’s not an atheist.

So, to summarize, we have one alleged atheist who says he’s Jewish, one self-described “Unaffiliated” senator who thinks atheism is beneath her, one openly non-religious legislator who’s a humanist and listed as “Other,” and a whole bunch of legislators who (I’m sure) are probably in the closet about their non-religiosity.

That’s not to say nothing has changed. Since two years ago, there are fewer Christians (-3) — specifically fewer Baptists (-6) and Methodists (-7) and Lutherans (-4) and Catholics (-5) and a whole lot more “Unspecified” run-of-the-mill Christians (+16). There are also three Muslims, two Buddhists, and two Hindus (so long, Tulsi Gabbard).

There are also 18 members of Congress who chose not to answer the religion question — the same as two years ago.

Those 18? (An asterisk denotes a newly elected member.)

Absent from two years ago are Huffman (now an “Other”), Katie Hill (who resigned), and Sen. Tina Smith (now listed as Presbyterian).

Republican Rep. Chris Jacobs seems like an unusual entry on the list, given his party, but he won a special election over the summer after another Republican resigned, then comfortably won the regular election in November. It’s possible he just didn’t fill out the form.

Another point of interest: In 2018, we saw the creation of the Congressional Freethought Caucus. It’s now up to 14 members. Of those 14, only Huffman, Casten, Pocan, and Jayapal are on the list above. The other members include three Jews, two Catholics, a Muslim, a Lutheran, and a Buddhist (Rep. Hank Johnson of Georgia).

Commenters will inevitably say this so I might as well echo my agreement: This is ultimately a superficial way of viewing the legislators. Everything I’m writing here is about symbolism — and there is a lot of importance in the idea of having religious diversity in public office, especially openly non-religious politicians. That would go a long way in decreasing the anti-atheist stigma that exists in our society. 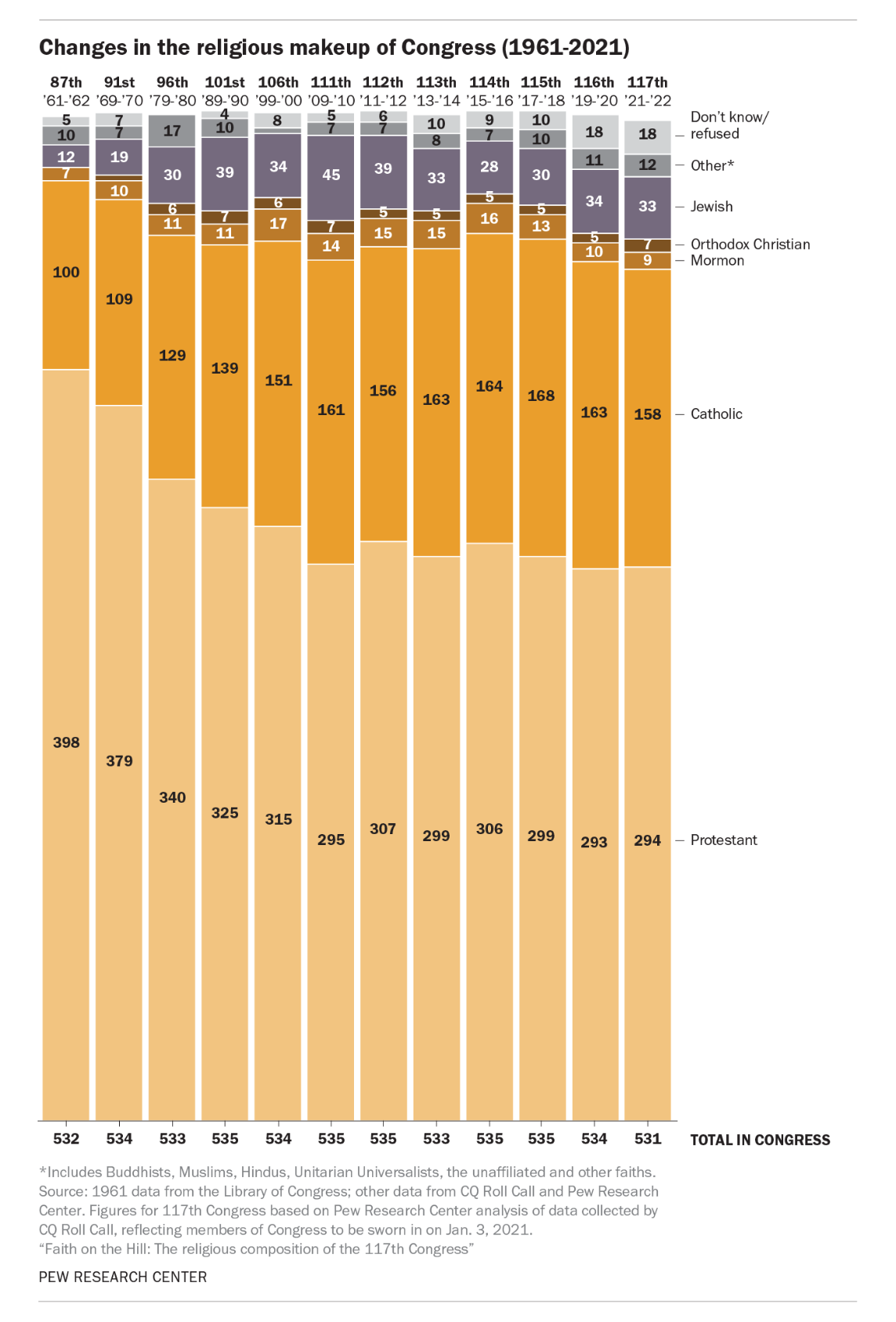 At the same time, what really matters is how those legislators would vote on issues that matter to most of us. A Republican atheist who voted against women’s rights, LGBTQ rights, and church/state separation would be fighting against the wishes of most people who identify as non-religious. It wouldn’t be something to celebrate. And there are so many religious Democrats who do a wonderful job fighting for progressive causes. As long as they keep doing that, I don’t really care how they self-identify.

But still, it would be nice to have more members of Congress willing to admit they don’t buy into faith-based nonsense.

January 4, 2021
E.W. Jackson: The Democrats Running in Georgia "Are Demonically Possessed"
Next Post