There’s never a bad time to remind people that White House chief of staff Mark Meadows (below) is an unethical Creationist, and a recent tweet from pro-Trump lawyer Lin Wood referencing “some serious skeletons” in Meadows’ closet gives us as good a reason as any.

An article in Salon by Roger Sollenberger takes the baton and revives a story that’s been told before but largely forgotten due to all the other examples of Republican corruption. 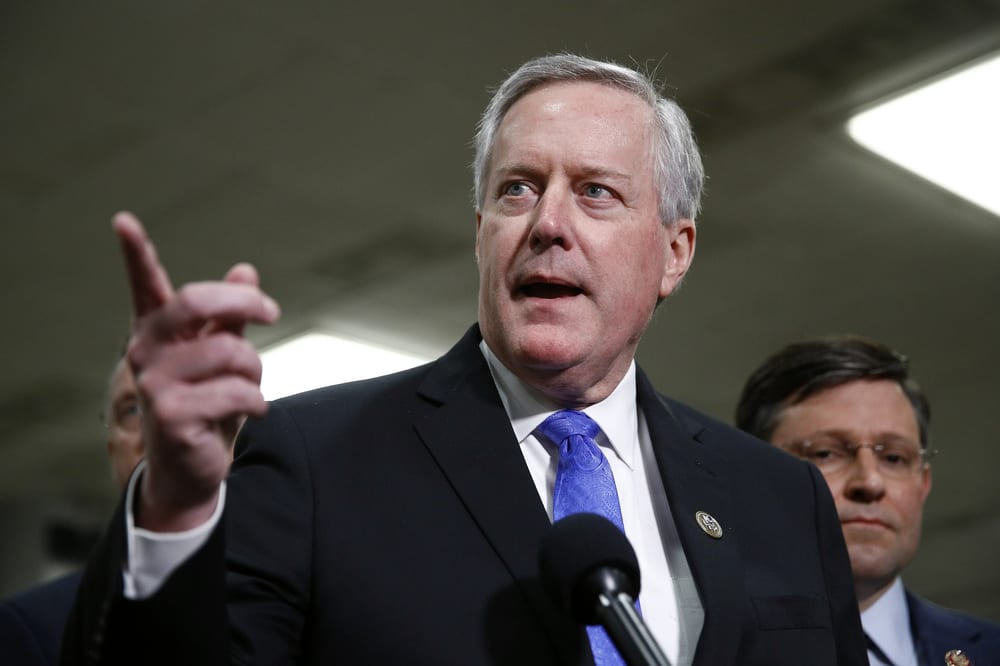 Here’s the backstory: It was more than six years ago when Answers in Genesis first announced a new dinosaur exhibit. As they put it in a press release, the skeleton of an allosaur — with “one of the best-preserved Allosaurus fragilis skulls ever discovered” — had been donated to the Creation Museum by Michael Peroutka, a man who once said promoting evolution was an “act of disloyalty to America,” that abortion was the “real racism,” and once sat on the Anne Arundel County (Maryland) Council.

Nothing about Peroutka bothered Creationist Ken Ham, who accepted the skeleton donation because it would “help us defend the book of Genesis and expose the scientific problems with evolution.” AiG said the skeleton had been reappraised at $1 million.

AiG added that the skeleton, which they claimed without merit “most likely died in Noah’s Flood, over 4,300 years ago,” was found in the Morrison Formation of North America, in northwestern Colorado.

Last year, The New Yorker‘s Charles Bethea published an article exploring the controversy leading up to that moment. It involved a dispute over the property, a potential ethics violation by then-Congressman Mark Meadows, one Creationist’s affair with a nanny who was allegedly groomed from the age of 15, and a whole bunch of people deluded enough to think the world is just thousands of years old.

Maybe the most damning allegation came right up front: Meadows owned that 134-acre property where the Allosaurus fossil was found and sold it to Answers in Genesis for around $200,000… but never mentioned the ownership or the sale in his annual financial disclosures — a violation of the law. He appeared to do this habitually, so it wasn’t simply this property that he left off the disclosure forms, but this land was controversial.

It was also bizarre that Meadows’ daughter was credited with helping “discover” a dinosaur skeleton on another Creationist’s property, though that claim is heavily disputed by the Creationist overseeing that property. A documentary film later promoted the younger Meadows’ “discovery.” It’s that property where the skeleton was found that Mark Meadows later purchased, then sold.

It’s unclear if any additional dinosaur fossils were ever found on Meadows’ land. In 2016, he sold the property to Answers in Genesis for $197,000, taking a deed of trust for $192,000, which had a 4.5% interest rate and monthly installments of about $11,000. That deed was released in 2018, and Meadows presumably would have collected the $11,000 payments for the following 18 months, which he never reported.

Ultimately, there’s a dinosaur skeleton under the ownership of Creationists that’s being used to promote Creationism, even though that’s not accurate. It was donated to the Creation Museum under shady financial circumstances. The congressman who sold the land to Ken Ham’s group never reported it, which dishonors both the oath he took and the religion he preaches.

And he’s now the chief of staff to a man whose corruption engulfs his own.