Pat Robertson Says Biden Will Be President: It’s Time for Trump to “Move On”

If Pat Robertson is a voice of reason, you know we’re living in scary times.

Today, on The 700 Club, Robertson said the election was over, Joe Biden was going to be the next president, and Donald Trump needed to “move on.”

It wasn’t an endorsement of Biden by any means. It wasn’t really even an acknowledgment that Trump lost.

It was more like an admission that all the attempts to overturn the election results weren’t going to pan out, so Christians might as well face reality and move forward.

Televangelist Pat Robertson declares that Biden will be president and that Trump "lives in an alternate reality," "is very erratic," and should not run again in 2024: "You've had your day and it's time to move on." pic.twitter.com/2WYCZOSNTO

… I think it is all over. I think the Electoral College has spoken. I think the Biden corruption has not totally been brought to fruition, but it doesn’t seem to be affecting the Electoral College, and I don’t think the Supreme Court is going to move in to do anything, and I think we [are] going to see a President Biden, and I also think we will be seeing a President Kamala Harris not too long after the inauguration of President Biden.

With all his talent, and the ability to raise money and draw large crowds, the president still lives in an alternate reality. He really does. People say, “Well, he lies about this, that, and the other.” But no, he isn’t lying. To him, that’s the truth. He had the biggest crowd on Inauguration Day. He had more people than ever (?), he was the most popular… he saved NBC with The Apprentice. You go down the line of things that really aren’t true, and you know, people kept pointing to them, but, because they loved him so much and he was so strong for the evangelicals, the evangelicals were with him all the way.

And I think it would be well to say: You’ve had your day and it’s time to move on.

Somewhere in that word salad are some hard truths for evangelicals to swallow. For what it’s worth, Trump ruined the economy and there was nothing about him that was “good.” His time in office was only a mixed bag if sexual assault, bigotry, racism, cruelty, and ignorance were things you were willing to tolerate in exchange for… cash and judges, I guess. Which many white evangelicals were perfectly fine with.

Anyway. This is all even more amusing coming from Robertson, given that as recently as a month ago — after the election was over — he was saying he still believed Trump would win: “We will not give up this great country and Satan, you cannot have it.”

So just like when Robertson mocks Young Earth Creationists or calls for the decriminalization of pot, enjoy this moment of common sense from an unlikely source. It doesn’t happen very often.

December 21, 2020
Lauren Daigle Still Doesn't Get Why Singing at a COVID-Spreading Rally Is Bad
Next Post 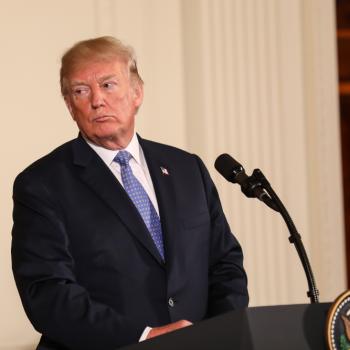 December 21, 2020 Does This Writer Denouncing "Christian Trumpism" Know Who His Colleagues Are?
Browse Our Archives
What Are Your Thoughts?leave a comment