We know that conservatives aren’t fans of Drag Queen Story Hour at libraries. But right-wing radio host and former candidate for Lt. Governor of Virginia E.W. Jackson took that even further, saying during a recent livestream that parents who take their kids to those events should lose custody.

He also compared the events to pedophilia, proving he doesn’t know what that word means or what happens during story hours.

“This is child abuse to take these children to be entertained by these perverse individuals whose lives are a moral sewer,” Jackson fumed. “You want to live that way, it’s a free country, live that way. If adults want to be a part of such gross, disgusting entertainment, you have a right to do that. But child abuse is what I would call taking children to see one of these freaks go through a whole lot of sexual garbage trying to instill this mess in the minds of toddlers and kindergartners.”

“And the stupid parents who take their children into this mess need to be dope slapped. They need to have their children taken away from them,” Jackson said. “Do you think toddlers and kindergartners are [asking] to go to Drag Queen Story Hour? Taking your children to church is not abuse. It’s what God commands us to do. But taking your children to Drag Queen Story Hour is abuse of a magnitude that is hard to overstate. As far as I’m concerned, it’s the equivalent of pedophilia, and it should be treated the same way.”

No one who defends Donald Trump has any business complaining about a supposed “moral sewer.”

Mind you, the “disgusting entertainment” in question here is… reading to kids. These are children’s books, not excerpts from Penthouse. While conservatives act like what drag queens do at an adults-only show is identical to what they do in libraries, that’s just not the case.

What’s shocking about Jackson’s statement isn’t so much that he hates drag queens — we already knew that — but that he thinks ripping kids away from parents who take them to these events is a worthwhile punishment. Jackson has said nothing about parents who took their kids to COVID super-spreader events, much less condemned the separation of families at the border. Nor has he complained about parents taking kids to Trump rallies, even though they’ll hear far more vileness and “disgusting entertainment” there than they would at a library. It’s also not “pro-life” to further burden the foster care system when no actual abuse is taking place, but Jackson isn’t know for his stellar logic. 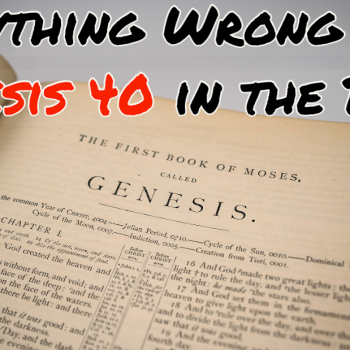 December 19, 2020 Everything Wrong With Genesis 40 in the Bible
Browse Our Archives
What Are Your Thoughts?leave a comment