After saying Democrats wouldn’t “represent the values of my home” — because apparently Georgians don’t care about affordable healthcare, voting rights, or protections for workers — he implied Warnock wasn’t a real Christian.

“You see this Warnock fella, who’s coming down here and disguising himself as some moderate pastor from the South who doesn’t believe in these radical ideas, but if you look at him really, what he actually believes, he is a radical’s radical,” Cawthorn said. “He wants to defund our police, he says he’s a pastor yet he’s all about abortion. This is somebody who does not represent what real Americans believe.”

A Black preacher who talks about social justice is hardly radical. Much less for a man who preaches at Dr. Martin Luther King, Jr.‘s former church. Cawthorn is really saying that the only Christians who “count” are white evangelical ones (and any Black pastors who share their beliefs).

More to the point, “defund the police” doesn’t mean eliminating them. It’s about redistributing government resources so that people get the help they need, which doesn’t always require armed officers. That point is obvious to anyone who knows anything about the protests and marches that have been happening — which is to say Cawthorn is throwing red meat at a very ignorant FOX News audience.

It’s worth noting that the social policies Warnock supports actually do more to lower abortion rates than banning the procedure altogether, which is what Cawthorn and his party would prefer.

Perhaps most disturbing is his use of the term “real Americans,” as if conservatives are the only citizens who matter. It’s the same kind of wording Republicans use when saying people on the coasts are irrelevant but “real Americans” live in the midwest or on farms. They say it because the Electoral College virtually ensures that any GOP victory won’t include votes from New York or California.

Simply put, what Cawthorn said in a short interview was far more offensive than anything Warnock has ever said from the pulpit. The question now is whether a majority of Georgia’s voters will recognize the bigotry coming from the Republican side and vote accordingly. 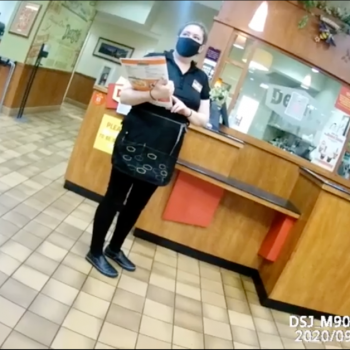