Going to Church Regularly Isn’t the Only Way to Improve Your Mental Health December 14, 2020 Hemant Mehta

Last week, Gallup released a survey about mental health and noted that, overall, it’s lower today than “it has been at any point in the last two decades.”

Which… makes sense since pretty much everything has been awful this year. (It’s getting better. I promise.)

But what was really surprising was that people felt worse this year, compared to last year, no matter how you broke down the numbers. No matter your political party, race, age, or income, there was a net feeling that your mental health was now worse than before.

Except for one group.

People who said they attended a religious service weekly saw a slight increase in their mental health. 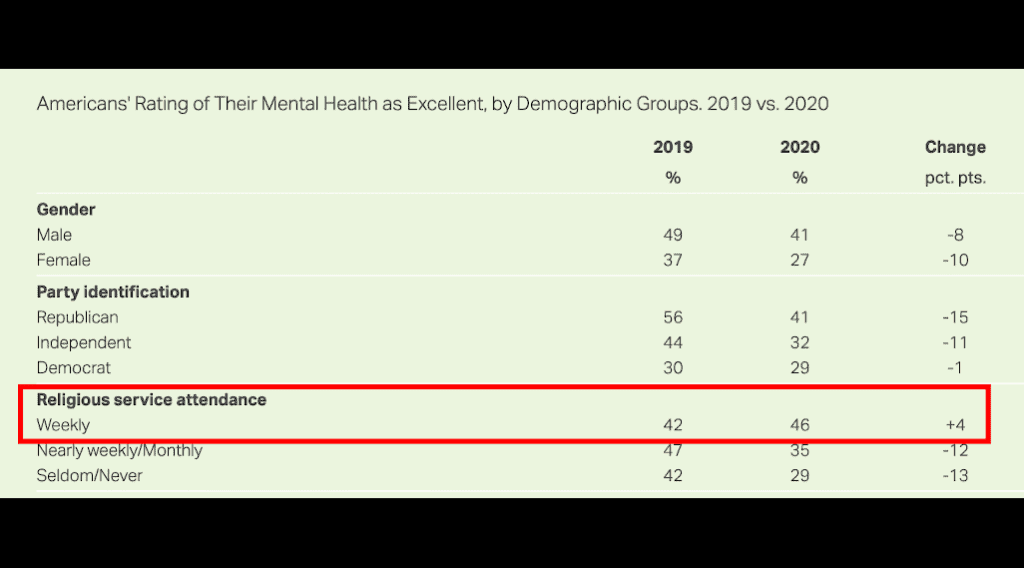 The reason for this, I would think, is obvious. During a year when politics dominated everything, and we were mostly stuck inside our homes, isolated and unable to see our friends, having a community that we could see regularly did wonders for those who wanted it.

It’s not because God exists, or because being religious confers some kind of special power on you. The survey results may have shown the same increase for people who had a weekly Zoom meeting with their friends, or had a book club that continued meeting regularly, or were active for a political campaign. If you had something to do, or something to look forward to, odds are your mental health was better because of it.

And yet a lot of right-wing pundits can’t understand that nuance. They’re insisting church — and church alone — improves your well-being. Or at least they’re sharing that headline without offering the all-important caveat.

Gallup polled people rating their own mental health in 2020 compared to 2019. Only 1 group rated their mental health higher this year over last year.

Since 2001, Gallup has asked Americans as part of its Nov. Health survey to say whether their own mental wellbeing is excellent. Here are the results from 2020 compared to 2019. Those that are connected to a local church saw a slight increase; so join us on Sundays at 10:30 am. pic.twitter.com/CZrH4NToxB

GATHER IN PERSON CHURCH FAMIKY. ITS SO NEEDED!
Gallup polling has found the only demographic with improved mental wellness in 2020 are those regularly participating in worship services.
Source:

According to a recent Gallup Poll, In 2020, mental illness has increased for every category EXCEPT FOR THOSE WHO PARTICIPATE IN WEEKLY WORSHIP. Church worship is an essential service.https://t.co/B7LFJdhOXj

Say it with me now: Church isn’t the solution. Having a community you want to see is the real factor here. If that’s church for you, sure, it’ll help. But it doesn’t have to be. Gallup didn’t ask about other gatherings. For some people, going to church regularly is actually bad for their mental health.

Hell, going to church regularly during a pandemic may also be bad for your physical health.

To use this poll to imply people would be better off going to church at all is to misunderstand what the poll is and isn’t telling you.

(Featured image via Shutterstock. Thanks to Shannon for the link)