Earlier this year, when the pandemic was just beginning in the U.S., an employee at Ramsey Solutions tested positive for COVID. But evangelical financial “guru” Dave Ramsey decided he would keep the Nashville office open… and he told his other employees he expected them to continue showing up for work.

It was a bad decision at the time, but perhaps you could forgive him only because it was March. There was so much about the virus we didn’t know.

We know a lot more today. For example, we know that face masks work. We know that vaccines have been approved but it’ll take a while for their effect to be felt worldwide. And we know that Ramsey’s company has seen more than 100 employees test positive for COVID so far, with 50 testing positive at one point in mid-November.

And yet Ramsey hasn’t changed at all.

For example, he views masks as a “sign of fear.” He’s also planning to host a giant in-person Christmas party next week — and the lack of precautions is downright dangerous.

An invitation, sent to the company’s 800 staffers in a newsletter obtained by RNS, advises that no children are allowed at the Christmas bash and that employees are limited to one guest apiece. No mention is made of masks being required.

Ramsey Solutions does not require masks at its offices — Dave Ramsey himself has been a vocal opponent of mask-wearing and other COVID restrictions. In a clip from his daily radio show, posted on YouTube in November, Ramsey railed against what he called “totalitarian” government restrictions and mask mandates, saying he wanted to “start a crusade” against them.

According to the complaint, filed on December 12, the vendor wrote, “Upcoming holiday party with 700-900 anticipated guests. Asked that catering vendors do not wear mask or gloves — as not to scare those in attendance.”

They’re still holding a giant party, though. So the employees remain at risk.

Ramsey is someone whose claim to fame is teaching people how to steward their money responsibly. Surely, risking an enormous hospital bill for a condition that, for the most part, is preventable, is the height of financial irresponsibility.

If Ramsey isn’t concerned about his own health, or that of his employees, then surely he should understand the economic ramifications of a still-spreading virus. If 291,000 deaths doesn’t convince him to take the virus seriously, his advice shouldn’t be trusted in other situations either.

If this is what he thinks Christian love looks like, then he should stop pretending he’s doing believers any favors. After all, he’s given plenty of questionable advice before. He’s supposed to help you grow your wealth, not spread the virus. 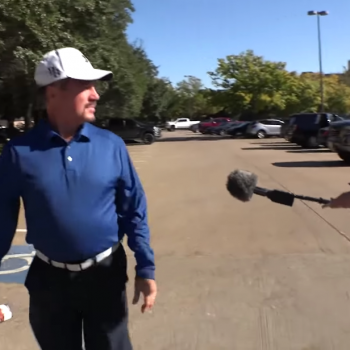