The U.S. Ranks 24th in Global Ranking of Nations Promoting Freedom of Thought

For the ninth straight year, Humanists International has released its annual “Freedom of Thought Report” describing serious cases of discrimination and persecution against atheists around the world. You can download the report right here by clicking on the “Download the 2020 Key Countries” link.

As you’d expect from anything released in 2020, there’s a lot of bad news. The report says that blasphemy is a criminal offense in at least 68 countries, religious courts settle cases in 48 countries, atheists are prohibited from holding at least some elected offices in 26 countries, and there is open harassment and violence against atheists in 12 countries. 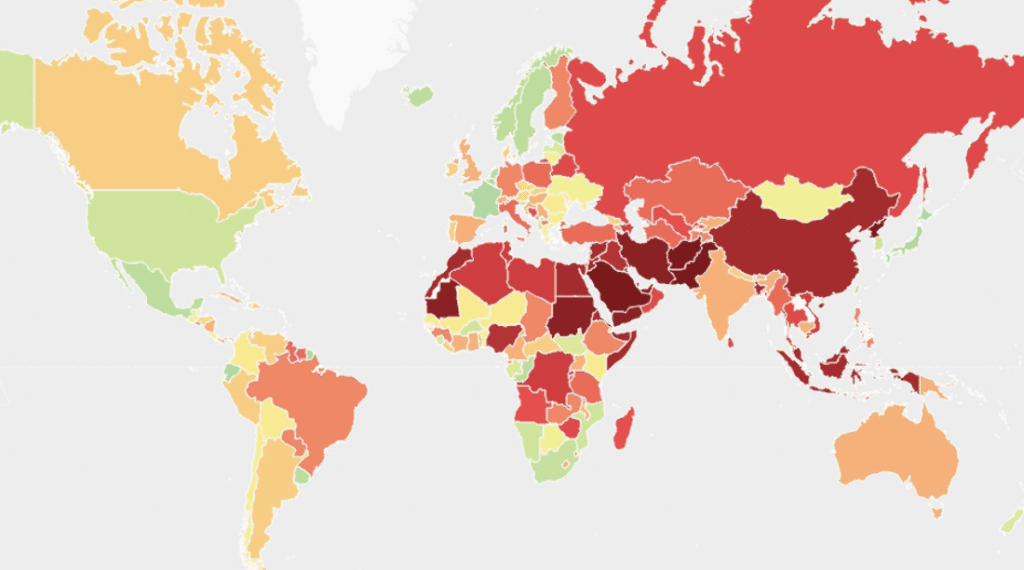 Our findings show that the overwhelming majority of countries fail to respect the rights of humanists, atheists and the non-religious. For example, there are laws that deny atheists’ right to identify, revoke their right to citizenship, restrict their right to marry, obstruct their access to or experience of public education, prohibit them from holding public office, prevent them from working for the state, or criminalize the expression of their views on and criticism of religion. In the worst cases, the state or non-state actors may execute the non-religious for leaving the religion of their parents, may deny the rights of atheists to exist, or may seek total control over their beliefs and actions.

In some cases, nations even blamed the pandemic on sin, implying that atheists were somehow to blame for COVID because they rejected God’s divinity.

The worst nations in the world when it comes to freedom of thought are, in order, Saudi Arabia, Iran, Pakistan, Afghanistan, the United Arab Emirates, and Yemen. The best include Belgium, the Netherlands, and Taiwan.

The United States ranks 24th on that list of 141 nations, an improvement from 32nd last year. We scored lower due to “official symbolic deference to religion,” infrequent but recurring and widespread social marginalization against the non-religious, and “discriminatory prominence… given to religious bodies, traditions or leaders.”

Still, despite any social stigma against atheists, there’s very little legal opposition to our existence. When it exists, it’s not enforceable. Hopefully, with a new Democratic administration, the worst faith-based actions of our country will end. Either way, though, the U.S. is hardly a model of free speech and religious freedom for the rest of the world because we’ve allowed right-wing Christians to dictate policy and had to fight to stop them from creeping closer to a theocracy. The Supreme Court is now controlled by a conservative super-majority that has already shown unnecessary deference to religion. It’ll take a lot to fight back.

December 11, 2020
Pastor: Planes Don't Crash If There's a Christian "On That Airplane Praying"
Next Post