Pastor: Planes Don’t Crash If There’s a Christian “On That Airplane Praying”

We learned last month that right-wing radio host and former candidate for Lt. Governor of Virginia E.W. Jackson tested positive for COVID even though he told his church earlier this year, “I can’t get it, because I talked to God about it.”

Jackson was speaking about his run-in with COVID on Wednesday during a Facebook livestream, but let me call your attention to an unrelated part of his mini-sermon where he was talking about how important it was to put your trust in God.

He talked about flying in planes that hit turbulence or deal with emergencies. In those situations, Jackson said, the only reason the plane makes it through is because Christians are on the plane.

… I have tremendous respect for the science that goes into aeronautics and the ability that we have. I mean, human beings are amazing because we’re made in the image of God, not because we won the evolutionary lottery.

But I have tremendous respect for the scientific breakthroughs and insights that allow us to do things like that. You’d be a fool not to. But… But… They still only know a little about a little, and God knows everything about everything. And when I get on that plane, you know what I’m saying? Lord, touch the pilot. Lord, guide their hands. Lord, give them judgment. Lord, give them wisdom. If there is any kind of emergency, help them to know what to do in the situation. Surround this plane with your angels.

That’s the fool! That if something goes wrong on that airplane, his life is saved because a believer was on that airplane praying, and saying, “Lord, I’m under Your protection.” And somehow, miraculously, everybody gets out alive and some idiot has the nerve to say… “Isn’t what we can do with science amazing? See?” And he doesn’t know that he got out alive because there was some saint who wouldn’t know an aeronautical principle if they saw one, but they know God, and they cried out to God, the living God, and somehow God worked that thing out and brought them through. And it’s happened in all kinds of circumstances.

So foolishness is to put your trust in anything and anybody but almighty God.

What an unbelievable arrogant thing to say.

Just to reiterate: Scientists told us how to avoid COVID, but Jackson claimed God granted him some kind of immunity. He caught the virus anyway. He’s fortunate the virus didn’t kill him. Maybe next time he should listen to the experts instead of whatever his gut tells him about God.

December 11, 2020
Conspiracy Theorist: I Will Refuse the COVID Vaccine Even "If Jesus Takes It"
Next Post 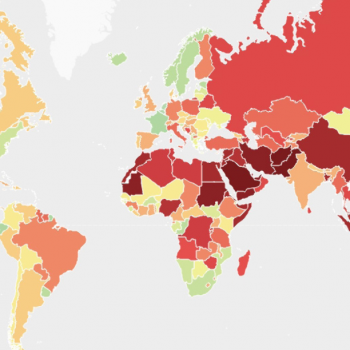