The Wisconsin State Capitol usually has holiday displays inside the building this time of year — which often leads to amusing non-Christian displays — but that tradition is on a break this year for obvious reasons. If the public can’t come inside, there’s no need to decorate.

But according to the Freedom From Religion Foundation, that didn’t stop two Republican lawmakers — Reps. Paul Tittl and Shae Sortwell — from installing their own tree with a pro-Christian message that says “The Magic of Christmas is not in the presents but in His Presence.” As if the Capitol is a Christian-owned building. 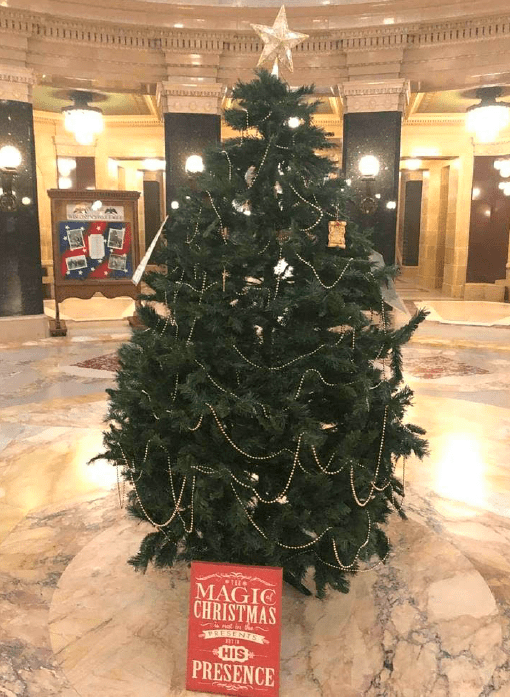 FFRF looks forward to putting up its equal-time Winter Solstice and Bill of Rights Nativity displays again in future years, but is more than willing to take a year off during the pandemic. In order to maintain religious neutrality, follow the law, encourage social distancing and respect the rights of all Wisconsin residents, the private religious display in the Capitol must be removed immediately, FFRF notes.

Gov. Tony Evers may be sympathetic to that argument. When asked for his opinion on the Christian display, he noted that the same lawmakers who found time to hijack the public space for Jesus haven’t lifted a finger to help people deal with COVID.

“They go 230 days without doing any work, legislatively, which I think is their job. And then spending a short period of time putting up a tree in the Rotunda. In a building that no one is in, or very few people are in,” says Evers.

“Can’t come to work to pass any bills around COVID-19, but by golly we will put a tree up when no one is looking,” Evers continued.

This is what the Republican agenda looks like: They’ll use the government to promote Jesus while pretending to care about the Constitution. They’ll call themselves “pro-life” while they allow people to die all around them. They’ll campaign for a job they don’t want to do.

It’s not just Donald Trump. The entire party is garbage. They have nothing of value to offer the public except superficial displays of Christian arrogance.

December 10, 2020
Jerry Falwell, Jr. Dropped His Defamation Lawsuit Against Liberty U.
Next Post