Pastor Celebrates COVID Outbreak at Church: “THE FAVOR OF GOD IS ON THIS HOUSE!” December 8, 2020 Hemant Mehta

Pastor Celebrates COVID Outbreak at Church: “THE FAVOR OF GOD IS ON THIS HOUSE!”

Pastor Greg Fairrington of Destiny Church in Rocklin, California — a guy who just last week blamed church closures on “liberal crazies and Satan” instead of COVID — is now the apparent leader of a place where there’s been a COVID outbreak.

A former member of the church told ABC10 news that multiple churchgoers have tested positive for COVID, but Fairrington won’t shut down the place because it might block his cash flow.

But that’s not the story.

Here’s the story: On Sunday, Fairrington played that entire news segment for his congregation… before launching into a bizarre celebration of it.

If nothing else, just watch the last 30 seconds of the video below, after he plays the clip:

During a sermon yesterday, pastor Greg Fairrington played a news clip featuring a former church member alleging that there's been a coronavirus outbreak at Fairrington's church, to which he responds, "I'm blessed" for being persecuted and "the favor of God is on this house!" pic.twitter.com/wpffXQpvRh

Let me give you the good news… You think that’s bad? That’s good. That’s good. Jesus says, “Blessed are they who persecute you for they say all kinds of evil about you.” I’M BLESSED! I’M BLESSED! THE FAVOR OF GOD IS ON THIS HOUSE! I DON’T CARE WHAT THE HATERS SAY! GOD HAS PUT A JACKET ON ME AND I! AM! BLESSED!

How many people in his church have to die before he stops calling himself “blessed”…?

No one’s persecuting this guy. He’s just dumb enough to think denying the seriousness of COVID, and putting his congregation in harm’s way to the point where several members may have caught the disease, is worth it as long as he gets to stay open and make money. The people trying to protect those members, he implies, are anti-Christian.

This is yet another Christian death cult. If only there wasn’t so much collateral damage associated with this disease. 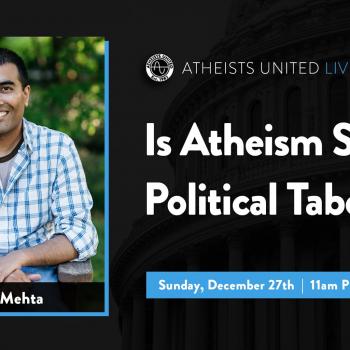 December 7, 2020
I'm Giving a (Virtual) Talk About Atheists and Politics Later This Month
Next Post