Christian blogger and professional mommy-shamer Lori Alexander (a.k.a. “The Transformed Wife”), who said earlier this year that COVID was a “blessing,” has published yet another screed against feminism, demonstrating that she never understood its meaning in the first place.

She’s specifically whining about the latest cover of the New Yorker in which a woman is seen on a Zoom call looking professional in front of the camera while everything off-camera is chaotic. 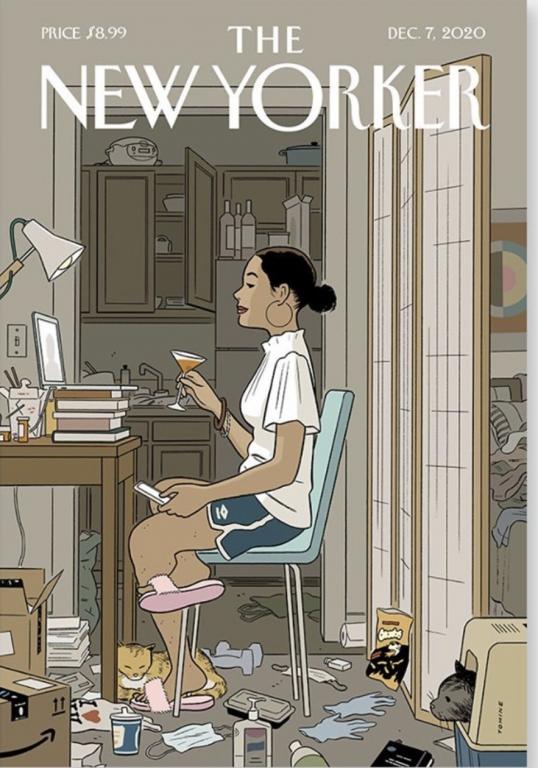 … Many women no longer are good housekeepers. Instead of nurturing babies, they are nurturing cats. They find their escape through alcohol. However, when it comes to searching for love, they can put on a beautiful face, a nice hairdo, pretty top, and a friendly smile.

They have been told their entire lives that their goals in life should be to search for all of the pleasure they can find while pursuing a college education and a career where they are taught Marxist feminism (which is complete rebellion against the Lord and His ways). In this way, they will find value, worth, and satisfaction. By the time they are hitting their late 30s, they aren’t so sure about the goals they were taught to seek. With a cluttered home, only cats to cuddle with, and a cold screen to stare at with a drink in their hand, they are finding that their lives are more empty and meaningless rather than fulfilling.

That’s a lot of extrapolation from a fictional drawing of someone doing her best to work from home.

It’s also a complete straw man (woman?) of the modern Millennial. While some fundamentalists may long for the life she fantasizes about, there are also plenty of other women who find worth and fulfillment in work and family — as hard as it may be right now to handle both from home.

What Alexander repeatedly fails to understand is that not all families can afford having a stay-at-home mom (or dad). I know several working women who would love to quit their jobs to be with their kids full-time, but they literally can’t afford to. The picturesque world that Alexander longs for, in which one person working any job for 40 hours a week could provide for an entire family, is increasingly out of reach for many people.

But she doesn’t do nuance. She’s still complaining about feminism:

Feminism is false teachings. There is no such thing as Christian feminists but I can tell you that I get the most criticism from the so-called Christian feminists, since they don’t like the way I “interpret” the Bible. My teachings are “dangerous” they warn others. They think their way is the better way, only it’s the false way. There are no Christian feminists. They are simply unbelievers.

Biblical womanhood is unappealing to them. They don’t want to submit to their husbands. They want to be preachers in the churches. They’re “enlightened and educated.” They don’t want to be a slave to any man nor under the authority of any. This isn’t a new and improved way of womanhood. No, it’s the same deceptive tricks that Satan used on Eve. “Hath God said…?” And Christian feminists want to yell “NO” in unison. They need to repent and believe in Jesus Christ and what His Word commands of them. Twisting His Words by adding or subtracting from them is a dangerous place to be.

This is what happens when you assume your opinions must always be shared by everyone or else they’re wrong.

The shortened version of feminism — that men and women should have equal rights and opportunities — is one that even conservative Christians should be able to agree on, even if fundamentalists believe certain opportunities should be off-limits to certain believers. Paul, who wrote most of the New Testament, acknowledged many women actively involved in church ministry (and not just in running the nursery). Throughout the Bible, we see women in leadership positions — Deborah, Esther, even the unnamed Proverbs 31 woman — who were praised and admired, not scolded, for it.

Alexander’s narrow interpretation of Scripture isn’t the only one that exists. In fact, much of the Bible refutes it.

December 4, 2020
Eric Metaxas is a Symbol of How Evangelicals Have Lost Their Collective Minds
Next Post 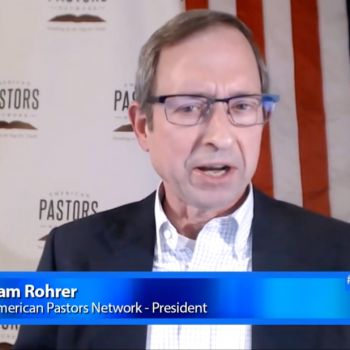 December 4, 2020 Right-Wing Pastor: The "Coup" Against Trump is a Sign of the "End Times"
Browse Our Archives
What Are Your Thoughts?leave a comment