The Human Rights Campaign recently released a “Blueprint for Positive Change,” highlighting a number of things Joe Biden‘s administration could do to make lives better — and more equal — for LGBTQ people.

Some of the advice is to just undo the damage of the previous administration. Some of it fixes loopholes that have been or could be exploited. For example, the Blueprint says the “Higher Education Opportunity Act,” a law first passed in 1965, could be interpreted to required accreditation agencies to grant a stamp of approval to religious institutions even if they discriminate in hiring or teach false science.

Accreditation matters. It means an outside party has determined your school meets certain standards. If students transfer schools, their new schools may accept credits from their old ones as long as those credits were earned at an accredited institution.

Here’s the problem: The law says accreditation agencies must “respect the stated mission” of religious schools. That means they can’t punish a school for being faith-based — which would be fine, as long as they meet all the other requirements.

But what happens when a Christian school teaches Creationism? Should it be accredited? What if the school bans students or professors from being in same-sex relationships?

The Blueprint simply says the government must make clear that bigotry and ignorance won’t be rewarded.

That’s not a weird request! Christians have their own accreditation agencies, after all. But the government shouldn’t lower their standards to Christian levels. There are plenty of Christian schools out there that would meet these requirements.

Now look at what Christian evangelist Franklin Graham said about all of this over the weekend:

This article reports how LGBTQ activists within the Democratic Party are pushing their godless, secular agenda with a potential Biden Administration. If you don’t conform to their ideology, agree with their sinful beliefs, teach what they say is right, they want to close you down. They will pressure and bully politicians to get their way. It is extremely dangerous if they are permitted to proceed unchecked. If they are allowed free reign, they will go after the accreditation of Christian colleges, then Christian ministries and churches next, to strip them of tax-exempt status and try to force them to operate under policies that go against biblical teaching. This is not only an attack on free speech and expression, but also an attack on our religious liberty. The presidential election isn’t finalized yet, but this shows why who we vote for is so important…

He’s lying. Franklin Graham is a liar. He’s a Christian who believes lying is okay in the name of Jesus. Any Christian who takes him seriously cannot be trusted to tell you the truth. They. Are. Liars.

More to the point: None of this calls for Christian schools that don’t meet these standards to be shut down. They can keep bigoting and teaching lies about science all they want. They just shouldn’t be accredited by any respectable agency. Christian ones? Fine. But not real ones.

Notice that Graham doesn’t even explain what the HRC’s Blueprint says. Because he knows if he’s honest, it’ll look bad. Graham is basically saying bigotry is a good thing, and brainwashing students about science should be fine, and Christian schools should be allowed to get away with this in the public sphere.

Bullshit. Schools can dupe students all they want. (Graham’s buddy Donald Trump knows that all too well.) But they don’t deserve a gold star if they refuse to adhere to basic standards of decency.

The Christian Post is equally misleading here, with a headline that reads, “LGBT group urges Biden to strip accreditation of Christian schools with biblical beliefs.” The implication there is that Christian schools that promote bigotry against gay students and professors should be rewarded for it.

If that’s the case, then why won’t they just say that? Because even they know their beliefs are garbage. They’re hoping that by shouting Biden is coming after Christians, they won’t have to spell out what version of Christianity they’re talking about.

Franklin Graham and the Christian Post don’t believe progressive Christians, or LGBTQ-supportive Christians, are True Christians™. They won’t say that out loud. But that’s what they’re skating around in their statements.

Albert Mohler, the president of the Southern Baptist Theological Seminary, does the same thing in a blog post denouncing the HRC’s Blueprint.

This is an open threat to the ability of Christian colleges and schools to operate by Christian conviction.

This is an outright attempt to eliminate religious freedom for Christian schools — or for any religious school that refuses to bow to the moral revolutionaries at the Human Rights Campaign.

“Moral revolutionaries.” As if being a decent human being and respecting LGBTQ people is such a radical idea.

If your school stands to suffer because an outside agency says discrimination is wrong and that students deserve an accurate science education, then too damn bad.

There are plenty of Christian schools that would do just fine under these new guidelines. Nothing would change for them because they weren’t bigots or anti-science to begin with. They have “Christian conviction,” too. Mohler, like Graham, implies all those schools promote some fake version of Christianity.

As always, churches and Christian schools are always welcome to set their own rules and create their own curriculums. But they cannot demand everyone else take them seriously when they haven’t earned it.

Regardless of whether the Biden administration adopts this agenda, students deserve to go to schools where their degrees will be respected after they graduate. If a school can’t guarantee that, it doesn’t deserve anyone’s tuition dollars. 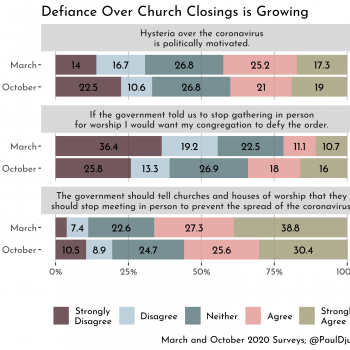