During an interview last week on Egypt’s Al-Hadath Al-Youm TV, researcher Ahmad Abdou Maher made a remark that’s both obvious and rather surprising. He said that young people are becoming atheists in part because religious texts include obvious scientific lies.

When they realize holy books aren’t telling the truth in certain obvious ways, they’re more likely to doubt the bigger theological claims as well. Maher even compared the lies to a COVID virus in your body: It may be relatively tiny — a small proportion of your body — but it has a tremendous effect.

There is no doubt that the young people who are becoming atheists are giving this a lot of thought. They do not become atheists because they are cowards who like heresy.

Today, when someone in high school, at university, or who has graduated… When he opens a [religious] book, he sees that according to all four schools of Islamic jurisprudence, a man cannot bring his sick wife a doctor or some medicine. Do you see? When these [texts] say that a pregnancy can last four years, and that the child must be named after his father even if they have been divorced for three years, [or] if he has been dead for four years… Things like this are why these young people become atheists and heretics!

He’s not wrong. Discovering that religious leaders lie is indeed one reason people begin the journey out of faith. It’s not the only one, but it’s definitely in the mix.

This is especially interesting given that the Egyptian government once claimed, in 2014, that there were exactly 866 atheists in the country. (The actual estimate is much closer to two million.)

Maher’s statement, then, is an admission that atheism is alive and well in Egypt, and that it can be blamed — if that’s the right word — at least partly on the mistakes of religious leaders who cling to fantastical stories that have no basis in reality.

I don’t know what the reaction will be, though. It’s not like religious leaders are about to come to their senses and ditch the myths. I guess they’ll be creating new atheists whether they like it or not. 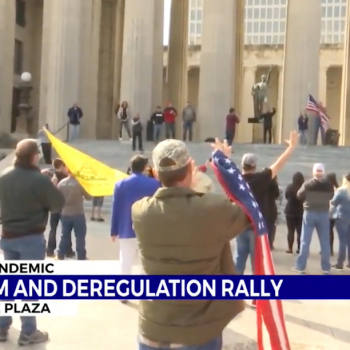