Klingenschmitt: Under Biden, There Will Be an “Atheist Army for the Antichrist” November 22, 2020 Hemant Mehta

Klingenschmitt: Under Biden, There Will Be an “Atheist Army for the Antichrist”

Conservative activist and former Colorado state legislator Gordon Klingenschmitt said last year that transgender people are evildoers who are “full of the Devil.”

With Joe Biden set to become president in two months, Klingenschmitt is very worried about what will happen with the military. But his fear goes beyond mere bigotry, as he explained in a newsletter in a section all about how Biden would “Transgenderize” the armed forces.

Female solders and students will be forced to share common showers and rooms with cross-dressing men or boys with male anatomy, within hours of Biden’s inauguration.

Christian troops who object to sharing co-ed showers and bunks with opposite gender anatomy will be vilified as ‘discriminators’ and punished, demoted, discharged or court-martialed. Mark my words. The devil wants an atheist army for the Antichrist, soon.

You know, every time I hear people using the phrase “There are no atheists in foxholes,” I hope they’ll recognize that many open atheists do, in fact, serve in the military. This is not the way I expected it to happen, though…

In any case, the military itself has no problem with trans soldiers. Donald Trump kicked them out on a whim because the Republican Party and its Christian followers are cruel. Allowing them back in will not hurt the military; it wasn’t hurting them before either. It’s that simple.

Klingenschmitt is heartless. His preferred method of spreading the gospel is by saying the most offensive things he can and seeing who’s still left in the room afterwards. In a better world, he wouldn’t have an audience at all. 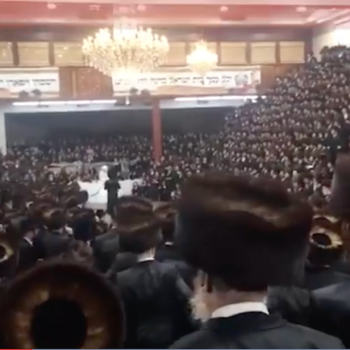 November 22, 2020
In Secret, Thousands of Hasidic Jews in NY Crammed Together for a Wedding
Next Post

November 22, 2020 Christian Group Recycles List of "Naughty" Companies That Downplay Christmas
Browse Our Archives
What Are Your Thoughts?leave a comment