Creationist: God Gave Us a Nasal Bone Because He Knew We’d Wear Glasses One Day

During an episode of Answers in Genesis’ bi-weekly show Answers News, the Creationist co-hosts talked about how to tell the difference between primate and human skulls.

At one point, Dr. Jennifer Rivera, the “Education Content Administrator” for the ministry, offered this explanation for why God gave humans a nasal bone:

… We also can look at the nasal bone right here. God designed humans very specifically, with this nasal bone, because He knew, because of sin, we’d be wearing glasses and contacts, right? So this helps hold our glasses. Primates have no need to wear glasses, so they were not created with that bone there.

Got that everyone? God knew you were a dirty rotten sinner, which meant your eyes wouldn’t be perfect, which meant you would need glasses, which is why he created a nasal bone, which apparently had no use for hundreds of thousands of years.

It’s not clear why God gave you a nasal bone if you wear contacts.

It’s not clear why God gave our evolutionary ancestors a similar nasal bone when they never wore glasses.

It’s also not clear why God had to create a bone to accommodate human inventions instead of just, you know, making our eyes better.

None of the other Creationist co-hosts pushed back on Rivera’s ludicrous unscientific claim. Which is exactly what you’d expect from people whose careers are devoted to ignoring and denying science. 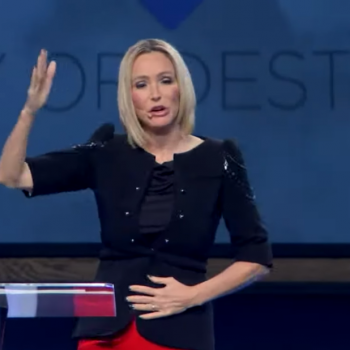 November 17, 2020 Paula White: Antifa, Black Lives Matter, and the KKK Are All "Anti-Christ"
Browse Our Archives
What Are Your Thoughts?leave a comment