We know there’s a gender wage gap: Women make less money than men, even when doing the same kind of work.

The exact amount is up for debate, depending on how you want to parse it. Explanations for the gap include how women go into different lines of work, how they might accept lower wages in exchange for other kinds of benefits, and (of course) how there exists flat-out discrimination.

But how does religion factor into that gap?

Two researchers, Dr. Traci Sitzmann (University of Colorado Denver Business School) and Dr. Elizabeth Campbell (University of Minnesota), have just published a paper in the Academy of Management Journal digging into that question, and they found that the more religious a place is, the greater its gender wage gap.

Just consider nations as a whole: In countries where at least 95% of the people say religion is a daily part of their lives, “women earned 46% as much as men.” But when religion was important to less than 20% of the population, women earned 75% of men’s salaries. (Not great. But definitely better.)

What about U.S. states? Using previously published data, Sitzmann and Campbell knew that the gender wage gap has decreased over the past decade — likely as people in power were pressured to correct the problem. But when the researchers grouped the states from most to least religious, it became clear that the more religious states had worse gaps to begin with. And over time, those states closed their gender wage gaps a lot less than the more secular states. 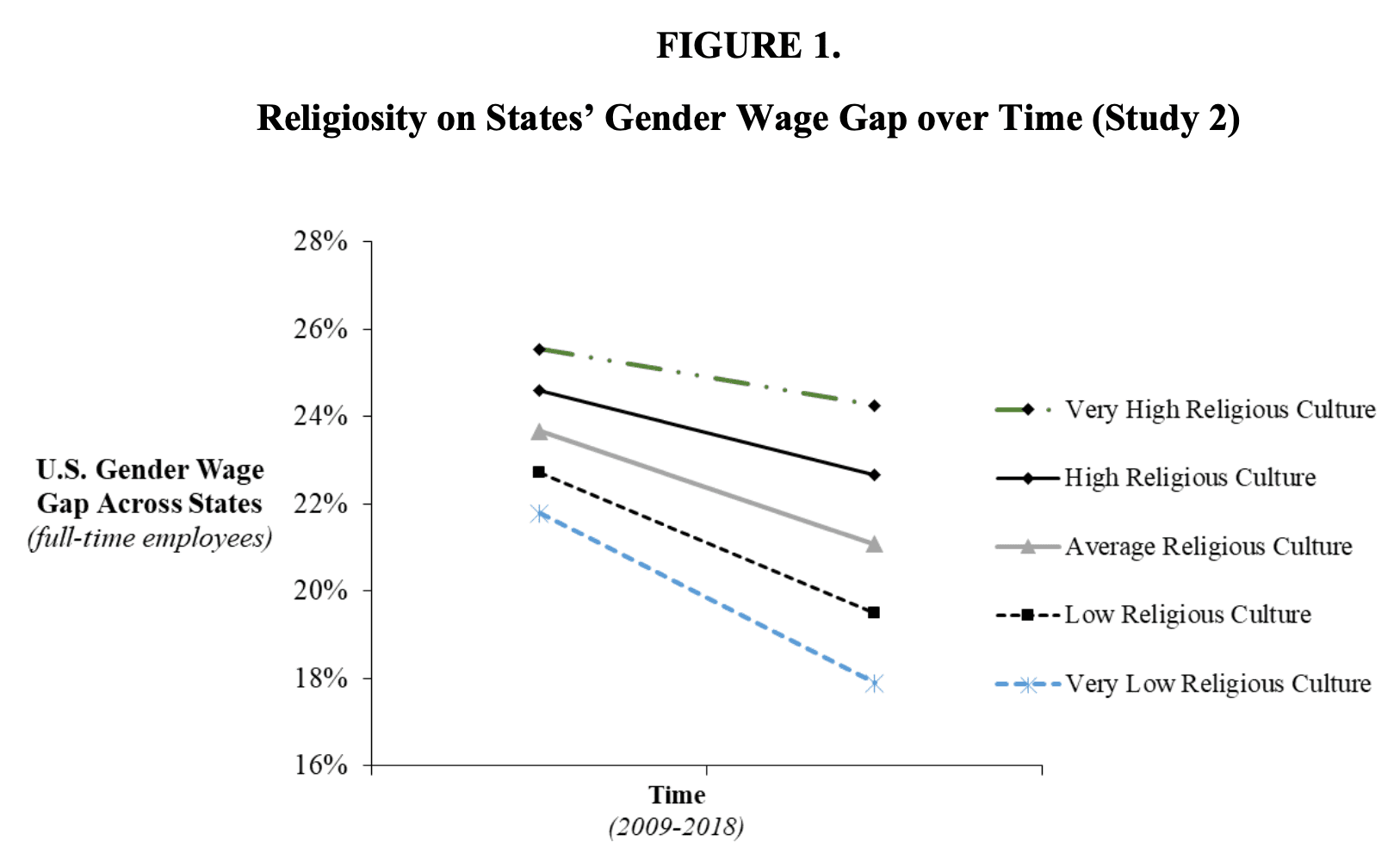 Sitzmann and Campbell even put a number on it: When you take into account how much of the wage gap in the United States can be attributed to religion — they say it’s about 17% — that “represents a $1,734 loss in annual wages for full-time female employees.”

More bluntly: Prayer costs women $1,734 per year (compared to men). If the trends continue at this rate, the wage gap would finally close in the least religious states by 2048… but it wouldn’t happen in the most religious states until 2129.

In other words, if we don’t want to wait that long, people with the power to do so must take action to correct it.

So why is all this happening? Sitzmann and Campbell point out that many religions are patriarchal in nature, and that mindset leads to the sort of culture that diminishes women’s contributions. Women are expected to churn out babies, then stay at home to take care of them. They are stereotypically not considered for more demanding jobs even when they have the capability of doing them well. Some religions go even further, prohibiting women from taking on those roles. (Consider also the “Mike Pence rule,” which leads certain kinds of powerful religious men to want to surround themselves with other men.)

But there’s also a way to fix this… that is, if religious leaders have any desire to do so:

Rather than waiting 47 years for wage parity, organizational leaders and policy-makers can assess whether employees are paid equitably based on the value of their work, regardless of gender.

The wage gap would be a problem with or without religion. But, as usual, religion just makes things worse.