It’s one thing when religious leaders perform rituals in public places, but it crosses the line when government officials get involved with it.

A couple of weeks ago, officers in the Chicago Police Department took their police horses — their horses! — to get blessed by clergy members of Grace Place Episcopal Church and Holy Trinity Lutheran Church on the occasion of the Feast of St. Francis of Assisi. They participated in this advertisement for religion while in uniform and while on the clock. 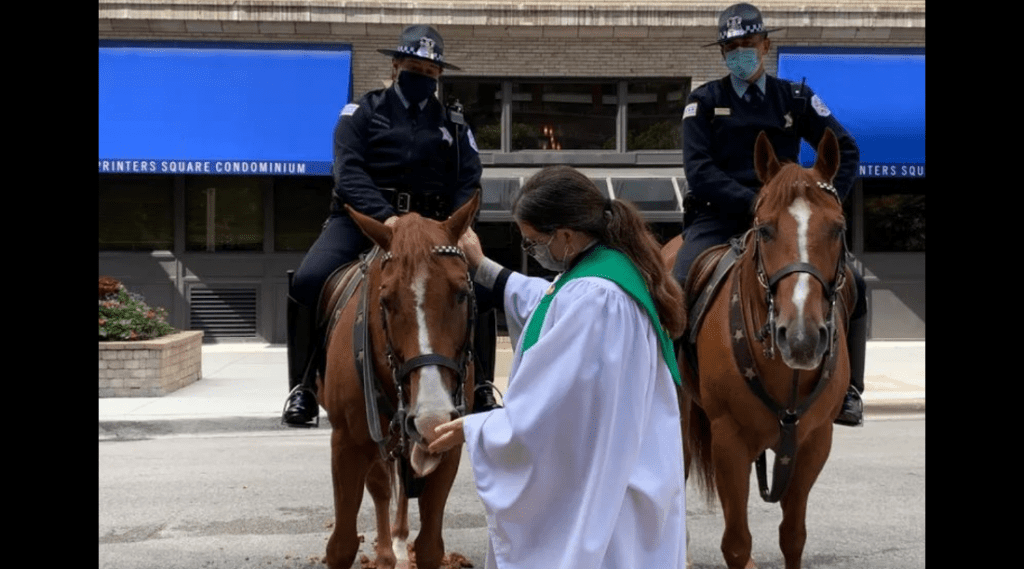 Now the Freedom From Religion Foundation is warning the CPD against this violation of church/state separation. While FFRF acknowledges the importance of community policing and participating in local events as a way to form positive working relationships, the appearance of a religious endorsement is still an issue.

Of course, government officials are free to worship, pray, and practice their religion as they wish when acting in their personal capacities. However, they are not permitted to provide prestige to their personal religion by using their government office and government title to promote a religious ideology. As public servants, you and your officers are charged with a great responsibility, and you have been given significant trust by the citizens of Chicago, including those citizens who do not share your religious viewpoint and will not appreciate your endorsement of the belief that they will come to harm for not believing in the Christian God.

This is not a lawsuit or even a threat of a lawsuit. It’s a reminder that well-intended gestures can still be a problem for reasons that may not be obvious. It’s meant to be helpful and it should be received that way, too. If the police participated in an Islamic or Satanic event — and you know they wouldn’t —

November 1, 2020 POLITICO: Here's How Falwell Got Away with All Kinds of Corruption at Liberty U.
Browse Our Archives
What Are Your Thoughts?leave a comment