In a batshit crazy video, a slew of Idaho Republicans denounce all the state and local emergency orders meant to protect people during the COVID crisis. They’re angry that churches can’t gather indoors and in-person, that restaurants can’t be jam-packed, and that some cities are requiring people to wear masks in certain essential places (like grocery stores).

These conservatives want FREEDOM… to spread the virus everywhere they go.

It’s not surprising, I guess, that they officials would appear in a video that denies the seriousness of the pandemic… but it’s still jarring to see Lt. Gov. Janice McGeachin hold up a Bible and a gun as examples of what she fears losing. (Because wearing a mask apparently violates the First and Second Amendments…?) 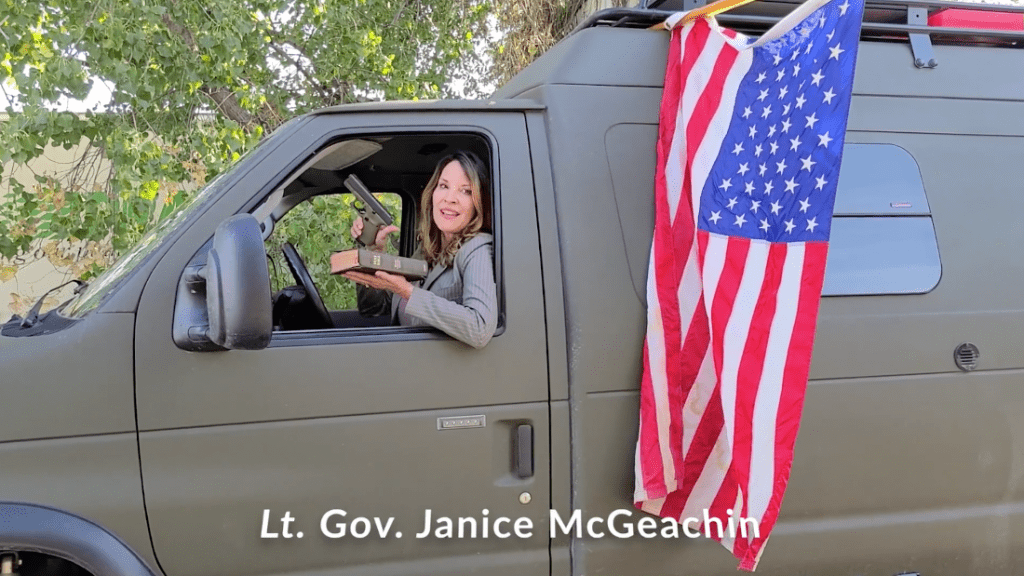 Interestingly enough, Gov. Brad Little, also a Republican, doesn’t appear in that video at all — because he’s (obviously) supported the executive orders that his partner over here opposes. (They’ve had public spats about how he’s handled COVID. He’s pushed for some restrictions. She’s in the Donald Trump camp that says if you just pretend the virus doesn’t exist, everything can just magically go back to normal.)

It’s not like Little has even done all that much. There’s no mask mandate. There’s no lockdown. He’s basically doing the bare minimum.

Idaho has no statewide mask mandate. Some counties and cities have instituted them.

It’s not the first time the GOP lawmakers have been critical of Little’s pandemic response. Seven of the eight representatives in the IFF video attended a rogue “special session” this summer where lawmakers declared Little’s actions, including his stay-home order in the spring, unconstitutional. The Idaho Attorney General’s Office has defended the legality of the governor’s moves.

McGeachin, who in the video displays a Bible and a handgun as she reads a line from the Idaho Constitution, has attended rallies in opposition of Little’s orders.

As one commenter under the video pointed out, “This is what happens when we don’t spend money on education in Idaho.”

October 29, 2020
Satanists: Justice Amy Coney Barrett Must Recuse Herself from Our Abortion Case
Next Post