The one conservative Christian mom at One Million Moms (Twitter count: 4,804) is furious that Uber Eats is advertising its services with a new series of commercials featuring gymnast Simone Biles and Queer Eye‘s Jonathan Van Ness.

Watch the ads below and see if you can figure out what the “problem” is:

OMM’s Monica Cole says the issue here is that Van Ness is wearing a leotard and that means… uh… SOMETHING VERY VERY BAD.

… Casting a cross-dresser in its ads screams liberal agenda and turns off potential Uber Eats customers.

Shame on Uber Eats for attempting to brainwash viewers with an agenda instead of focusing on providing a helpful service, especially during a pandemic. Potential customers have plenty of other food delivery options to choose from instead of doing business with Uber Eats and its parent company Uber. Uber Eats and Uber are actually pushing consumers to the competition with their propaganda.

Look, I have no idea why that commercial would make me want to use Uber Eats. It’s just… random. I guess it’s funny to some people, somewhere. But I definitely don’t understand how seeing Van Ness in a leotard is supposed to brainwash me.

Cole has an answer for that:

For anyone curious or struggling with his or her sexual identity, watching someone prance around in the opposite sex’s clothing is not the answer.

What exactly would anyone questioning their sexual identity gain (or lose) by watching these ads? They don’t do anything. It’s just a guy trying to do… I’m not sure what, I’ll get back to you on that, but it’s not affecting my sexual orientation! That’s not how anything works.

OMM wants people to sign a petition against Uber Eats for “supporting the LGBTQ agenda,” but the ads aren’t doing that either. It’s just another example of the Christian hate group throwing anything they can find against a wall and hoping it’ll stick. Their aim is getting worse. 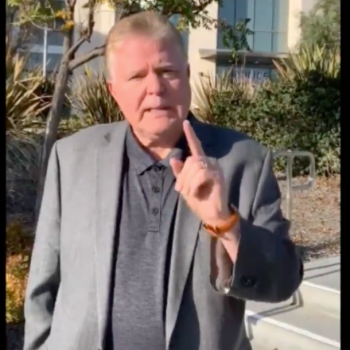 October 29, 2020 Preacher: 60 Million Aborted Fetuses Would Totally Vote for Trump if They Could
Browse Our Archives
What Are Your Thoughts?leave a comment