Earlier today, Donald Trump tweeted another lie about how Democrats supposedly want to “SHUT YOUR CHURCHES DOWN.”

DEMS WANT TO SHUT YOUR CHURCHES DOWN, PERMANENTLY. HOPE YOU SEE WHAT IS HAPPENING. VOTE NOW! https://t.co/dqvqz6b1WD

Obviously, that’s not part of the liberal agenda. Not today. Not ever. (Democrats take religious freedom seriously.) Anyone who saw the hyper-religious Democratic National Convention, or who’s ever heard Joe Biden talk about his faith, or read the Democratic Party’s platform, or who’s seen progressive Christians and their allies marching for justice would know Democrats have no problem with religious faith.

That said, Trump’s tweet is a lie for other reasons too.

That video? People aren’t being arrested for holding “outdoor church services.” That was a rally outside a city hall, billed as a worship service but actually just a way for Christians to show up in a large crowd, reject social distancing, refuse to wear masks, get punished for it, then complain about how they’re being persecuted for their “religious freedom.”

It’s also amusing how only one guy is arrested in that video while everyone else is allowed to continue singing. That pretty much shuts down the whole going-after-believers lie. In fact, three people were arrested and only for “resisting or obstructing officers.” Five others received citations for violating the rules.

In other words, they weren’t punished for being Christian. They were punished for violating local COVID restrictions. The cops were absolutely right to go after them — and the arrests occurred only after plenty of warning.

You would think a guy who just went to the hospital to treat his COVID would have some respect for sensible precautions, but this is Trump. He’s a damn fool who doesn’t care how many Christians die as long as they pledge loyalty to him first.

As we’ve said before, conservative Christians always think neutrality is an attack on their faith. Playing by the rules is persecution. Thinking about the health and safety of other people is persecution. Democrats daring to exist is persecution.

And Trump, who privately mocks Christian beliefs but needs Christians’ votes, is more than happy to play into their Persecution Complex by spreading lies. The conservative Christians who support him are too ignorant to recognize they’re being duped. 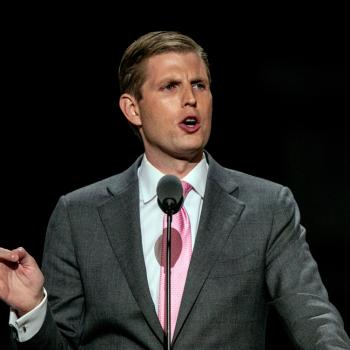