Previously, the hashtag had been the domain of white supremacist right-wing extremists. The Proud Boys are an SPLC-designated hate group founded in the lead-up to 2016’s fateful election. They’re known for holding and propagating extreme anti-immigrant, anti-Islam, anti-LGBTQ, and anti-woman positions.

The BBC traces the current phenomenon, however, back to the night of the presidential debate, when Donald Trump failed to condemn his white supremacist supporters, directly telling the Proud Boys in particular to “stand back and stand by” and musing (rather chillingly) that “somebody’s got to do something about Antifa and the left.”

Far-right actors generally took the statement as an endorsement, adopting “stand back and stand by” as an unofficial motto and incorporating it into memes on social media, marked with the hashtag #ProudBoys.

The very next day, George Takei (of Star Trek fame) suggested flooding the very same hashtag with pictures of gay men “doing very gay things” in order to make it useless for rallying and organizing the racist far-right group:

I wonder if the BTS and TikTok kids can help LGBTs with this. What if gay guys took pictures of themselves making out with each other or doing very gay things, then tagged themselves with #ProudBoys. I bet it would mess them up real bad. #ReclaimingMyShine

The reference to “BTS and TikTok kids” dates back to late August, when a collection of K-pop lovers flooded hashtags like #AllLivesMatter with concert footage, anime in-jokes, and choreographed homages to their favorite stars.

And like the K-pop stans who came before them, the gay men of Twitter delivered, filling the hashtag with a rainbow-spattered celebration of gay love that’s often sweet, occasionally sassy, and always better than anything the actual Proud Boys hate group has to contribute to Twitter’s ecosystem.

Just take a look at a relatively representative sampling:

#ProudBoys jumping into action after the standby orders are lifted pic.twitter.com/GKFMHuFY5p

Loving life with my partner of 27 years. We are #ProudBoys pic.twitter.com/YL3ZOhTLfX

#ProudBoys We make one hell of a family! pic.twitter.com/LEuuubbfpF

Excited for our wedding! 6 years of growth and love. Wouldn’t have it any other way. #ProudBoys pic.twitter.com/O4SOPXPSoD

Allies also joined the fun, posting pictures of their queer-and-proud loved ones:

My son, who is a highly intelligent, talented, and courageous FtM trans teenager. He gives me hope that his generation can and will stand up to hatred and make the world a better place for all human beings. #ProudBoys pic.twitter.com/Pf0he3eUG0

I’m proud of the #ProudBoys in my extended family. Ray and Joe were together 55 years. They were married August 1st 2013, the day same sex marriages became legal in Minnesota. They met in 1960. They were together 53 years before they were allowed legally to marry. pic.twitter.com/cqQykDjdED

Love is such a beautiful thing. #ProudBoys pic.twitter.com/Ewztl6koNc

Takei and his husband Brad Altman soon added their own picture to the mix:

Brad and I are #ProudBoys, legally married for 12 years now. And we’re proud of all of the gay folks who have stepped up to reclaim our pride in this campaign. Our community and allies answered hate with love, and what could be better than that. pic.twitter.com/GRtSH1ijQ8

(Takei and Altman were one of the first gay couples to obtain a marriage license when California struck down its laws against same-sex marriage in 2008.)

Several of the couples posting wedding pictures spoke of long-standing relationships that suddenly became marriages three, four, five years ago… a stark reminder that marriage equality only became the law of the land in America as recently as 2015:

My Husband & I Celebrating 19 years together this month as well as 4 years married #proudboys pic.twitter.com/xiStErpxrD

On our wedding day. #ProudBoys pic.twitter.com/8VFCPOr4xY

With rumblings surfacing in the Supreme Court about the possibility of overturning Obergefell on religious liberty grounds, the hashtag is more than just a cute way to drown out a hate group; it’s a reminder of who and what we’re fighting for.

I think it’s hysterical. This isn’t something that’s offensive to us. It’s not an insult. We aren’t homophobic. We don’t care who people sleep with.

Once more, the far-right is weaponizing the idea of free speech to try and convince progressive people to allow them to operate unchecked, lest they be labeled intolerant or abusive. But drowning out a hate group’s hashtag is itself a form of free speech. People have banded together to tell the Proud Boys that they’re not interested in that kind of hate. And this time, they said it with rainbows. 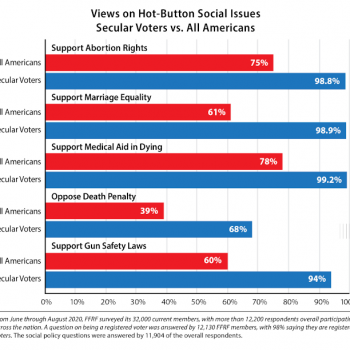 October 5, 2020
Survey of Atheist Voters Finds That We're Wildly Progressive on a Variety of Issues
Next Post 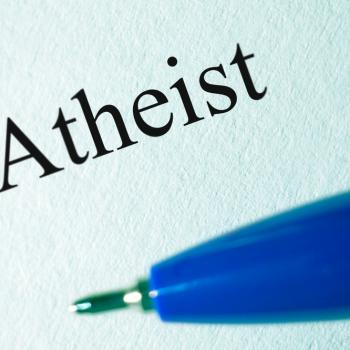