Earlier this year, American Atheists released the results of a survey they conducted of non-religious Americans. Even with all the caveats — it was a self-selected survey, likely drawing in the sort of people who have strong opinions on religion-related issues — the results were still useful in informing us of what Secular Americans believe about a variety of issues.

Now the Freedom From Religion Foundation has followed suit with a survey of their own membership. Again, this is not a representative sample of all atheists. It’s a survey of the sort of people who would join FFRF.

But what’s really interesting in their survey is that just about everyone who submitted responses indicated they were planning on voting… which basically made this a sampling of registered atheist voters. That in itself isn’t surprising given that FFRF is an advocacy organization, just like it isn’t surprising that only 1.4% of members said they identified as Republican.

Here’s what shocked me, though: Not only were these 12,000 atheists who responded more progressive than run-of-the-mill liberals; they were off-the-charts more progressive. 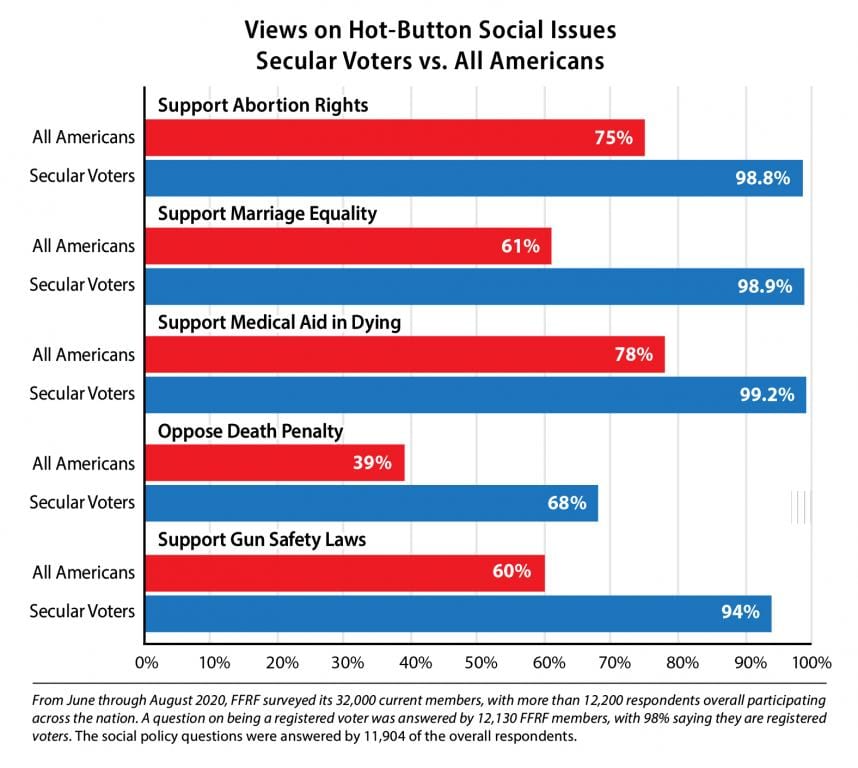 While 79% of all American adults say they support equal rights for women, that was true of 99.6% of the FFRF atheists.

77% of all Americans want the Supreme Court to uphold Roe v. Wade, but 98.8% of FFRF atheists support abortion rights.

When it comes to marriage equality, 61% of Americans support same-sex marriage, but 98.9% of FFRF atheists said the same thing.

It’s like this across the board. The same discrepancy was seen with support for universal health care, a guaranteed minimum income, free/reduced public school tuition, DC statehood, and gun safety. Which is to say FFRF atheists are extremely progressive, even on issues that don’t directly concern FFRF.

Why is any of this important?

Consider this: FFRF’s members, who presumably have little in common except a disbelief in God, turn out to hold very similar beliefs on a host of other political issues. Those are issues that align very strongly with progressive Democratic politicians. We’re “values voters” with actual values, not right-wing MAGA cultists who’ll do whatever Donald Trump wants no matter how cruel it is.

Now imagine what you would find if you surveyed non-religious Americans who weren’t FFRF members. Those percentages might go down… but I can’t imagine it’d be by that much.

So if Democrats are looking for voters who are compassionate, caring, and active, they should be reaching out to atheists specifically. They sure as hell shouldn’t be avoiding us.

“Overall, nonbelievers are obviously caring, compassionate, involved and engaged individuals,” notes Dan Barker, FFRF co-president, “who clearly recognize that this world is what matters. Not believing in a god doesn’t mean you don’t believe in values. We are the real values voters.”

FFRF is a non-profit group. They’re not here to endorse a political party. But the survey finds that atheists are a natural constituency for progressive Democrats eager to find volunteers, donors, and people willing to spread their message.

When will the politicians start realizing that? 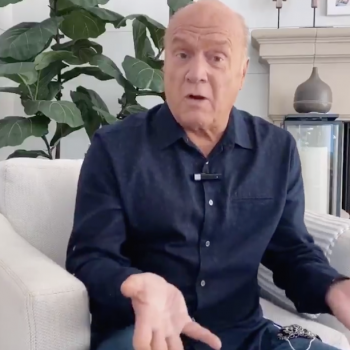 October 5, 2020
Megachurch Pastor Greg Laurie Tests Positive for COVID; Now Who Did He Infect?
Next Post 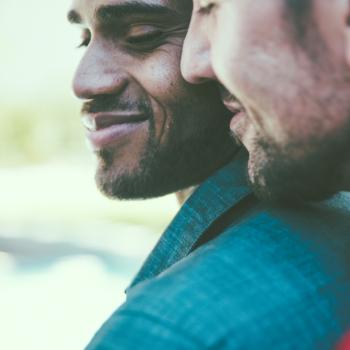