Pat Robertson: The Recent Prayer Rally Will Bring us Five Years of “Paradise”

On Monday’s episode of The 700 Club, televangelist Pat Robertson predicted that the prayer rally from last weekend will result in several years of “paradise” in the United States:

“I believe that what’s happened out there on Saturday with all this prayer, I think God is going to hear it, and we’re going to see a dramatic change in our society,” Robertson said. “I think the dictators of this world will be coming down. I believe that we’re looking at four or five years of really — it’ll be like paradise because the devil is going to be bound for time.”

“There’s going to be a major shift in Congress, in the Senate, in the House,” Robertson added. “It’s going to be a good thing. We’re looking at hope not, not disaster. I think disaster was on the way, coming into our society with antifa and the radical group that has got a named called Black Lives Matter and other groups like this that had communist influence. I think the Lord is going to put an end to it ,and we’re going to see a period of blessing.”

If that prayer rally was meant to signal four more years under Donald Trump, and the polls show Trump losing by quite a bit, Robertson may have inadvertently given a stamp of approval for a future Biden administration. Paradise is coming! Checks and balances will return! Stronger coverage for health care and civil rights! A semi-functional democracy!

We’ll find out soon. But it’s clear the Christians he’s speaking to don’t believe in the effectiveness of prayer alone, otherwise, they wouldn’t be bending every single precedent while ignoring Trump’s obvious hypocrisy, all in order to get their coveted justices on the federal bench.

Also, the idea that Robertson hears “Black Lives Matter” and thinks “disaster” is a reminder of the sort of audience he caters to. It’s Trump’s base. 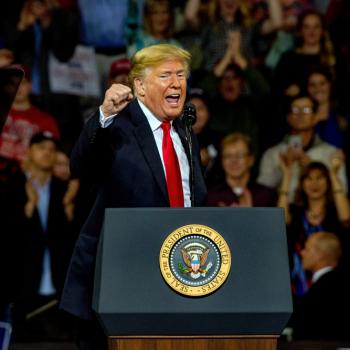 September 30, 2020 Comparing Trump's Behavior to What Germany Saw in the 1930s Isn't "Outrageous"
Browse Our Archives
What Are Your Thoughts?leave a comment