Conspiracist: Choose a President Like a Husband: No “Beta Male” or “Soy Boy” September 25, 2020 Beth Stoneburner

Conspiracist: Choose a President Like a Husband: No “Beta Male” or “Soy Boy”

She’s advising women to vote for a president just as they would choose a boyfriend or husband: Go with the tough and strong guy even if he’s awful to you.

“Yikes” doesn’t begin to cover it.

… “Let’s be honest. Who would you rather choose as a boyfriend or husband? Is it a man who is protective, tall, strong, an alpha male, someone who’s going to make sure that he protects you, your family, your country, who’s tough and strong, a little bit of an A-hole sometimes — just a little bit, sometimes? Someone who’s a little rough around the edges, but you know that he has strength, but he also has heart, and he’s compassionate?”

“Or would you choose a boyfriend or husband who is soft?” she continued. “Who’s a beta male, who’s a soy boy, who is weak, someone who doesn’t stand up for his convictions? Someone who just lets everyone else steamroll him and changes his mind and flip flops every other minute, who isn’t strong? Pretty sure that most women would choose a husband or a boyfriend who is that alpha male, and that’s what Trump is. He is not only the alpha male compared to Joe Biden — sleepy Joe, who’s completely weak — but he also is like the bodyguard of our country.”

I would start with the partner who doesn’t take joy in the deaths of “only” 200,000 people (and counting)…

If that candidate isn’t on the ballot, it’s okay to settle for a less-than-perfect option and continue fighting for your values. That’s how politics works. You shouldn’t have to settle in a relationship. At the very least, if you make a wrong decision in your love life, you can (hopefully) break things off whenever you want and the entire country won’t have to suffer because of your partner’s issues.

It’s been said before, but imagine how weak you must be to look at Donald Trump and see strength.

Lorraine acts like a person who wears his motions on his sleeve and isn’t afraid of strong women is incapable of leadership. It says a lot more about her than it does Joe Biden. 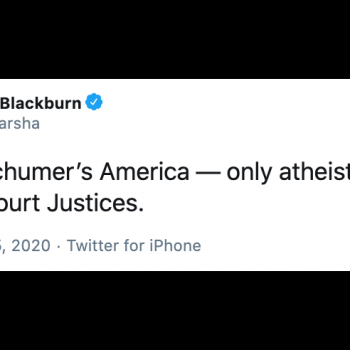 September 25, 2020 Michele Bachmann: If Biden Wins, We'll Be a Communist Country Within 100 Days
Browse Our Archives
What Are Your Thoughts?leave a comment