Christian Writer: “I Can No Longer Call Myself an Evangelical” September 24, 2020 Hemant Mehta

Christian Writer: “I Can No Longer Call Myself an Evangelical”

D.L. Mayfield is no longer an evangelical Christian. She was up until a few weeks ago — despite her misgivings about how so many other white evangelicals were Trump supporters — but she writes in an essay for Religion News Service that she decided to ditch that label after seeing Sean Feucht in concert.

Feucht has been traveling the country, holding massive in-person concerts where people ignore face masks and social distancing, creating super-spreader events in the name of Jesus. In some cases, he’s going directly to places where there have been Black Lives Matter protests… I guess to provide some sort of alternative for Christians who really, really love racism.

Mayfield went to his concert in Vancouver, Washington because she wanted to show people she was a Christian who supported BLM and opposed police brutality. (Kind of like progressive Christians who go to Pride parades with signs that suggest #NotAllChristians are bigots.)

I think @jarrodmckenna said it best: when Christian songs are the heartbeat of your oppressive political regime, it’s time to rethink some things. Last night me and my husband and my younger sister went downtown to counter protest @seanfeucht and his “riots to revivals” gathering. He is someone who profits off of saying places like Portland are dark and in need of the light they bring. We wanted to honor the struggle/movement for Black lives that had been taking place downtown for the past few months. I personally also wanted to go and confuse the heck out of people and interrupt some live-streams with my Christian signs. I should have been mentally prepared, but it really was awful. Seeing a thousand Christians packed together without masks, singing triumphalistic worship songs I know every word to, on land that was stolen long ago and right now bears witness to people crying out for justice and getting brutalized by local and federal police night after night. Proud boys were hassling us. Angry men and women without masks on tried to argue and shout at us almost the entire time. It felt like being in a very bad dream. There is a lot of talk about Christian unity from certain spaces right now. But what does that mean? Does that mean screaming and shouting down voices that say Black Lives Matter? Does that mean ignoring the cries of the marginalized? Does that mean calling entire cities like Portland demonic because the people are daring to dream of another world? I have to tell you I’m not ok today. I want to be very honest right now and say the god that all of these people were singing to feels like a stranger to me. I am sitting in that loneliness today. And I am grateful for the witness of Christians outside of my small community who have saved and restored my soul.

… For almost two hours I was constantly confronted, yelled at, livestreamed, prayed over and told I was not a real Christian (for the record, I was simply holding a sign that had a Bible verse on it).

Surrounded on all sides by people with arms raised high, eyes closed, joy and certainty shining on the faces of the true believers, it hit me: We read the same Bible, and we all call ourselves Christians. But we are not singing to the same God. I could no longer pretend otherwise.

I lost my religion that day, in that crowd of worshippers.

I can no longer call myself an evangelical, because what defines a white evangelical in the United States has become a longing for an authoritarian state where Christianity is prioritized and privileged.

There’s a part of me that desperately wants to scream, “No kidding. This isn’t new! Where have you been for the past two decades?! We’ve been trying to tell you this!” But that’s not helpful. She figured it out herself. She realized that remaining in the evangelical tent wasn’t going to change the broader movement, and she’s better off on the outside. It’s never easy to change your mind — so publicly, too! — so give her credit for that.

In fact, Mayfield writes, this may just be a personal reckoning for something that began long before this summer:

If I am being honest with myself, I know I was kicked out of the evangelical world a while ago. I was told I could not write for Christianity Today anymore because of my stance on LGBTQIA issues. I left my church in Portland after a long and drawn-out period of trying to advocate for equality for women and the LGBTQIA community. And now I routinely have evangelicals, both in person and online, question the state of my salvation because I support the Black Lives Matter movement.

She’s still a Christian. But she’s also someone who recognizes that religion alone isn’t a virtue; she knows that in the case of so many white evangelicals, their moral bankruptcy is constantly on display.

Hey, welcome to the club. May many others follow in your footsteps. 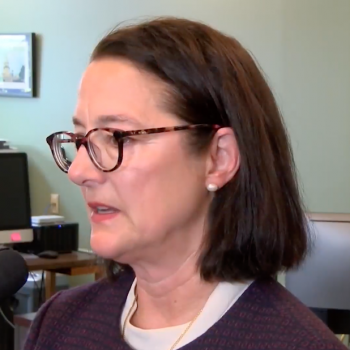 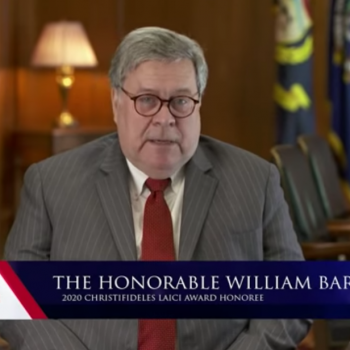