Liar Charlie Kirk: If Biden Wins, “They’re Going to Come After the Churches”

Charlie Kirk, the right-wing commentator who is forever linked to Jerry Falwell, Jr. in a way Pool Boys can only dream of, said on his radio show Tuesday that a Joe Biden victory this November would mean the end of church as we know it.

How? Who knows. But if he’s trying to get me to not vote for Biden, he’s going to need a new strategy.

All of the plans of the ruling class were obliterated by a man who they don’t think should even be invited to a cocktail party, let alone become President of the United States. They’re going to come with bloodthirsty revenge.

Joe Biden is not nearly so exciting that he’ll inspire bloodthirsty revenge. It’s also hard to imagine the devout Catholic will “come after the churches” when that literally never happened during the eight years President Obama was in power.

Meanwhile, the guy who says he cares so much about “the Christian ethic” was just busted for maintaining a troll farm in which he hired children to spread lies about Biden on social media.

He a liar and he’s a conservative Christian. You connect the damn dots.

September 18, 2020
A Drunk Jerry Falwell, Jr. Injured Himself, According to Wife's Recent 911 Call
Next Post 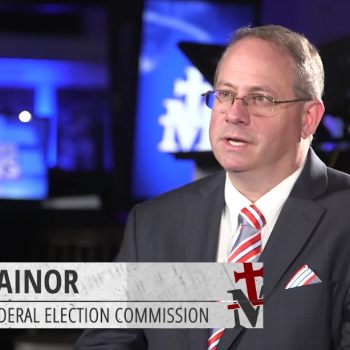